Now in its 42nd year, the annual Durham Drama Festival (DDF) is a showcase of the best new student theatre at Durham University.
The festival is a week-long celebration of new writing, offering integrated performances, workshops and socials open to all who are passionate about theatre. DDF is a key event in the Durham student calendar, demonstrating the wealth of creative talent amongst the student body and encouraging participation in theatre in any and every capacity. 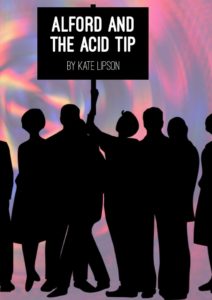 We catch up with Kate Lipson, written of Alford and the Acid Tip, which will perform at The Assembly Rooms Theatre as part of the festival. The show follows the local penitentiary’s Death Row in California, USA, where three protestor’s attempt to have their voices heard. It follows their journeys through mind, matter, and surreality. From game shows to prison gates, Alford and the Acid Tip is a hallucinogenic comedy exploration of the capital punishment system and its consequences. Lipson also wrote Brand Flakes, an ensemble comedy about the creation of a new cereal brand which premiered at the Durham Drama Festival last year, which was also her theatrical debut in Durham.

What was your inspiration behind Alford and the Acid Tip?

I went to a talk by a death-row exoneree called Ray Crone and he spoke about the American justice system and the capacity for injustice within it. Additionally, my sister worked for a time with the group Tennesseans Against the Death Penalty, and she spoke a lot about the subject, so I was relatively well-informed from the beginning. I read about the Alford plea and was struck by how ridiculous it seems. 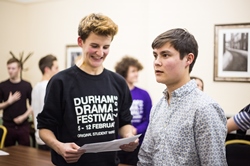 What makes this production different from what you’ve written before?

I’ve only written comedy before, and while this play definitely has comic parts in it, it is obviously much more serious. My previous work took humour in people arguing and being ridiculous in the mundane. This piece focuses on the absurdity of how I perceive the justice system, and hopefully is informative as well as entertaining.

Why did you decide you wanted to do Durham Drama Festival again?

DDF was my first experience of doing drama in Durham and it was so fun. Being the writer of the show gives so much leeway for creativity, and you can adjust the script to play to your actor’s strengths.

The Assembly Rooms Theatre programme for Durham Drama Festival this year has some really amazing plays, I’m absolutely chuffed to be alongside these plays. Alford will definitely be a contrast to the shows, both of which are essentially verbatim pieces. Toll recalls the true memories of its writer’s great-grandad during The Great War, and Screen 9 is a documentary piece, which is the culmination of over a year’s worth of research into the Aurora shootings in Colorado during a showing of ‘The Dark Knight Rises’ in 2012. I’m really looking forward to being able to see them. Hopefully the tone and staging of Alford will provide an interesting contrast to them.

– Site-Specific Night (including The Bocchae: a post-truth tragicomedy in three parts, Daisy’s Dead, and A Year of Minutes) – Thursday 9 February, 7:00pm, venues across Durham.

– Black Box Night (including Rose, The Not So Divine Comedy, and Cold Fronts and Hot Flushes: The Short Stories of Kevin Spacey) – Friday 10 and Saturday 11 February, 7:00pm, Vane Tempest, DSU.