What does it take to put on a show?

Durham Student Theatre (DST) collectively puts on about 90 shows from 26 individual theatre companies annually. Chances are, during your time in Durham, you will have gone to watch at least one of these entirely student produced and performed shows. The talented cast, aided by lighting design and sound effects, would have left you amazed and wondering – just what does it take to put on a show? 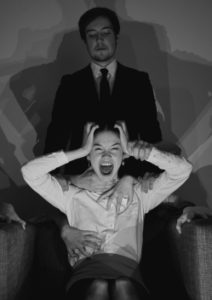 From the 1-3 February 2018, Wrong Tree Theatre, a DST theatre company, will be putting on a production of ‘Inferno’. Inspired and lovingly devised from Dante’s divine comedy, the cast and creative team of about 30 people have been working tirelessly since the start of last term to create something completely from scratch and original. A show often takes about a bit more than a month to produce, but given that Wrong Tree specialises in devised and physical theatre, every minute on stage, as the director, Henry Gould likes to say, is equivalent to an hour’s worth of rehearsal – adding up to almost 3 months’ preparation. This requires the cast and production team to constantly be on task and a hundred per cent devoted to the show.

It first started off with an idea. Before the start of this academic year, having read Dante’s Inferno, Henry thought “what if the Devil had an image crisis?”. He writes, on Inferno’s rehearsal blog, regarding the general idea of the show, “One person, on a tour of Hell, led by a Devil intent on updating his empire for a modern audience, and the adventures this could lead to”. As a director, he writes that two things had struck him: 1) how easily it was to physically portray the scenes in Inferno and modernise the original text, and 2) how difficult it was to turn his mental image into a working image with the cast. Directing meant breaking down each scene into its central themes and then explored in detail, getting the cast to personally come up with original characterisations. 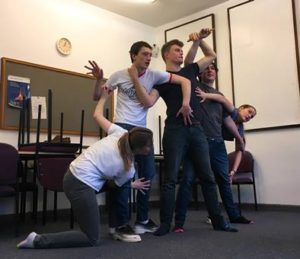 Given the nature of the rehearsal process, what makes the preparation of ‘Inferno’ unique is the role of the writer, Florence Petrie. She “relies on the discussions of the cast and directors to create the basis of a script”, comes up with a general framework, then “begins writing certain aspects that she would like to incorporate in it”. What often happens is the cast will come together, along with both directors and the writer, for ‘writing sessions’, coming up with their own ideas. Flo says, “Everyone always has a nugget of gold in their writings, and I have incorporated everyone’s writing at some point within the script”.

Another aspect unique to a show put on by Wrong Tree is the completely original music. Composed and arranged entirely by our musical director, Emily Winters, the music serves to add a different dimension to a show that largely focuses on physical story-telling. Regarding the process, Emily recounts the first time she presented a piece to Henry. “It was Disney levels of sugary sweetness with pristine strings”, but Henry was doubtful, and she “point blank refused to diminish the piece to a brief little snapshot”. Having had no inspiration for a while, Henry said he needed a piece to put on in his room and cry to, causing a shift in Emily’s head. “I made everything minor, added new accents, a little syncopation… I plucked off Tinkerbell’s wings, gave her and extra head and replaced her glucose bloodstream with orphan tears”. And with that, she singlehandedly composed all the scores for a 90-minute show. 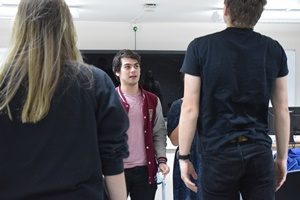 Working behind the scenes to ensure all logistical and practical aspects of the show are considered are the producers of the show. I have found that despite not having been involved with theatre at all prior to Uni, I found myself part of a welcoming and friendly community. The role of the producer is stressful, what with fully booked rehearsal rooms and a struggle to find rehearsal venues. Nonetheless, there’s not much that can compare to the feeling of seeing the team’s creative vision come to life – and to do that I have to consider every aspect to ensure that everything will turn out the exactly the way the cast and directors have envisioned.

The time and effort that the entire team has put into the show, alongside doing their degree and some others, even a sport, shows a devotion to and passion for theatre that inspires and will ultimately pay off when time comes to perform it on stage in front of an audience.

To read more about the rehearsal process, head on over to the Wrong Tree Theatre rehearsal blog: www.wrongtreetheatreinferno.wordpress.com

Find out more about this year’s festival and book tickets online at the DST webpages.