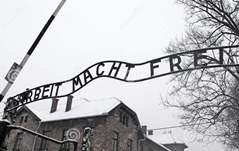 It has been suggested by many writers, about many of the worst dictatorships throughout history, that it is the death of tolerance and independent thought in our institutions that heralds the predominance of a corrupt rule. The significance of these values, and the importance of upholding them in places like our Universities, was brought home to me recently when I took part in the Holocaust Educational Trust’s programme Lessons From Auschwitz, along with other student leaders invited by the Union of Jewish Students.

Visiting Auschwitz-Birkenau, something done by so many each year, was a question in itself for many of us taking part in the trip. How do we reconcile the role of the tourist, poking around at the remnants of humanity at its worst, with the need to educate ourselves and others about a chapter of history, which, while inarguably dark, still has much relevance today? Reflecting on the experience in the follow-up seminar, we agreed that the discomfort this tension causes is part of what makes the experience so meaningful. Seeing Auschwitz is intrinsically uncomfortable, even painful (but nothing like the true agony that its prisoners endured). It isn’t a “good” trip, but a life changing one. It teaches you so much and yet is so difficult to explain and inspires gratitude and guilt, and also hope, through the stories of resistance even in the face of certain death. It’s something I think we should all do.

The programme that I took part in allowed us to really identify our thoughts and feelings about the Holocaust before we went, and then to reflect back on them afterwards. It included a pre-trip seminar and discussion about the Holocaust and what it was for those who lived it – the Holocaust refers specifically to what happened to the Jewish communities of Europe, though other groups of people were also targeted by the Nazi regime. This covered pre-WW2 Jewish life in Europe, tourism in Auschwitz today and a talk from a survivor of the Holocaust whose father went to work one day and never came back, and who came very close to being another victim of the death camps. This was of course very moving to hear – especially as his father was captured while helping others, then tortured and killed for doing so. This gave us an insight into what the trip would be about.

A visit to Auschwitz becomes a memory of individual stories and individual scenes, which are so often lost in our general recollection of the Holocaust. For me these were varied – the town of Auschwitz where before the war a synagogue had stood between two churches. An exhibition of human hair at the camp is all that remains of some of the many people so wickedly murdered. The death wall where people were shot, and the gas chamber where hundreds were packed in to a small concrete room and poisoned. Families being ripped apart forever. A memorial written in the different languages of everyone who died there – there is one in English to recognise a Scottish teacher who was killed at the camp. Real people imprisoned simply because of who they were, not anything they had done. 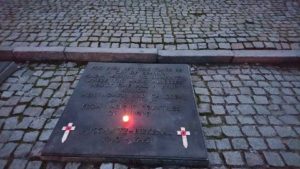 I felt a lot of emotions during the visit, but the one thing that is fundamentally important to our lives as students is that University should be a space of inclusivity where differences are celebrated. It should be one of the first places that people raise their voices in defence of those who are excluded or discriminated against. Students should continue to discuss, question and remember events like the Holocaust. At University we are encouraged to understand and challenge. The Holocaust didn’t start in concentration camps; it was a result of an accumulation of prejudices ingrained in society, perpetuated by propaganda that made people believe that it was justified, clouding their view of true humanity – there was challenge but there wasn’t enough. To be informed of what happened is a sign of respect for those who lost so much, but it also prompts us to imagine how we would and should act when faced with intolerance. By considering this we prepare ourselves to have the confidence to stand up to prejudice and inequality in our communities.

Holocaust Memorial Day is 27 January, the day Auschwitz-Birkenau was liberated in 1945. This day is not only a chance to commemorate the Holocaust but also other genocides since, where lessons from Auschwitz clearly haven’t been learnt.