UniSlam poetry, the power of the spoken word

UNISLAM is the UK’s largest poetry slam tournament and poetry summit, involving days of talks, masterclasses and workshops alongside the competition. The three-day festival involves bringing together poets from across the country, and at all stages in their career. This year the competition took place in Birmingham with the Durham University Poetry Society team travelling down to compete, first at the Birmingham Hippodrome and then at the finals in the Old Rep Theatre. Teams compete in four rounds of four poems each, with a strict time-limit of three minutes per piece. It is high-stress, high-pressure poetry!

Poetry and Spoken Word are art forms that are most definitely on the rise. 1.3 million volumes of poetry were sold last year alone, and 41% of those sales were to people aged 13-22. Poetry is something that young people are turning to, it may be its short, easily-shareable format, its increasingly political messages, or it may just be that we’re looking for forms of expression that cut through the chatter of our busy lives. Poetry, and its louder performance-focused cousins, Slam and Spoken Word are here to stay. 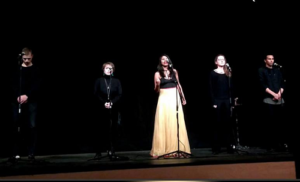 Slam is as much concerned with the performance as the writing, and in UNISLAM we were given scores of 0.0 to 10.0 on both the content and the performance of our work. It’s a case of balancing theatrical flair with literary know-how. Often slam poetry is highly personal, and I’ve seen topics range anywhere from personal trauma to iPhones.

Durham University Poetry Society hosts auditions for the slam team, as well as a slew of regular poetry-themed events, and our journal, The Gentian. But all of this is new to us. When I captained the team last year, UNISLAM 2018 was the first slam competition any of us had ever been to. It was a truly fantastic and completely terrifying experience. We started planning next year’s trip before we’d even come home.

Like any team or cast, we held auditions. Spent late nights writing and performing together, reading at our open mic nights and performing at fundraisers, including as part of The Poetry Book Society’s National Poetry Day celebrations. We had so much support from the community, as well as practical advice from our coach, professional performance poet, Jay Hulme. We had successes, placing first in the 2018 Slam of the North, hosted by Leeds University. 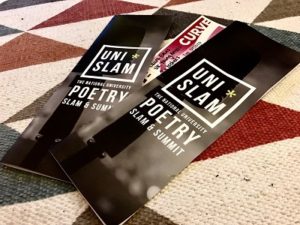 This year, captained by the unflappable Fahad Al-Amoudi, we prepared to compete against twenty-four other teams. Although, it didn’t always feel like a competition. The community always comes first in poetry, and as the hosts of the event are fond of saying it’s “the poetry, not the points” that truly matter in a competition like this. As the President of Durham University Poetry Society, and last year’s UNISLAM captain, coming third in this year’s competition feels like a reward for the two years of hard work we’ve put in.

We heard some amazing art, formed long-lasting connections with other societies and definitely made some of the judges cry. Trust me when I say there is nothing more satisfying than watching your teammate’s words create a wave of messy-sobbing turned to standing ovations.

In addition to finishing third in the finals, one of our team members, Prerana Kumar was awarded the Verve Prize for her individual poetry. Her dedication, as well as the dedication of everyone on the team have shown that Durham is creating a long-awaited and deserved impact on the spoken word scene in the UK.

Find our more about Durham University Poetry Society and over 250 other societies available to students through Durham Students’ Union.