Every year students from each Durham College celebrate the community spirit and achievements of their college with an end of year event. Trevelyan College is no exception and this year’s annual ‘Trevs Day’ was a highlight in the Trev’s students’ social calendar!

Organised by the students from the College’s Social Committee and the Social Chair, involving various other College committees throughout the common room such as Durham University Charity Kommittee (DUCK) and the Executive Committee, as well as coordinating plans with the Sabbatical Bar Steward – Trevs Day is a wide ranging, group effort of the Junior Common Room, to create a fun end of year celebration to remember.

The day itself began weeks before, with numerous planning meetings and coordination to make the day go smoothly. The theme of the day was “Tropical Beach Party” and began with an ‘Tropical’ themed breakfast. Setting up for this began at 7am for those involved in the organisation. The incredible college DUCK representative  and her “DUCKlings” made hundreds of pancakes for the common rooms to consume. At one point, the flour ran out which involved quick thinking from everyone, luckily, the kitchen staff were incredibly helpful when they happened to have flour. This is just one of many examples that demonstrate how or College Day day was a joint effort with staff and students all working together.

Getting the party started

Meanwhile, the executive committee, technical committee and social committee, all made up of students, members of Trev’s College, were busy setting up.  At 8am, a song relevant to the theme of the day is blasted throughout college to wake up student’s living in. This year, the song was the classic, “La Bamba” by Ritchie Valens. Students started peering out of their windows to see what Trevs Day had in store and what was going on, on the lawn.  By 9:30am breakfast kicked off, being consumed in a matter of minutes. Next, the annual photo was taken on the back lawn. As part of tradition, everyone brings a personal prop to represents something special to them. After this, a graduation photo was taken for all those who wanted to commemorate their time at college. Almost everyone wore their special Trevs Day T-shirt as well as sunglasses in the photo and indeed throughout the day! 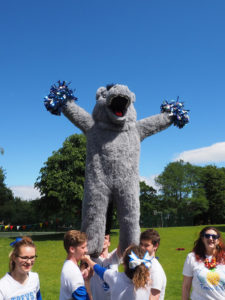 Shortly after, Trevs Cheer, our Cheerleading team performed an impeccable routine,  kick starting the day with a ‘Trev’s Cheer’. Their hard work to put together something so spectacular, so quickly  after exams just shows how dedicated they are. After the performance, everyone got involved in being lifted to great heights by the cheer team, even ‘Trevor’ the Trev’s College mascot! Everyone joining in just showed the friendly all-inclusive spirit of the common room and the College. Live music started straight after, to celebrate Trevs as the musical college. All the musicians who played were from Trevs and played to an incredible standard.

While the music was going, on a giant inflatable assault course arrived, henna tattoos was available for free, the bar opened, and a surfboard simulator machine launched – so the party really got started! After a few hours of enjoying the day, the Trevs Super Couple competition began, raising money for the North-East Air Ambulance. This involved various challenges four nominated couples to raise money before someone was declared champion. Throughout the day free ice cream was provided alongside the option to purchase some of Durham’s finest food from “Fat Hippo”.

Later in the day a formal was organised by our unbelievable Services Officer. Unfortunately, only 273 out of the 700+ of the Junior Common Room members could attend as spaces were limited, so it was wildly competitive to get a ticket for this event. After dinner everyone enjoyed an incredible bar night DJ’d by two of the finest from Trevs DJ Society until the celebrations ended at 11pm.

Although the party was over, the night didn’t end there for many of the organisers. Many different members of the Junior Common Room contributed to putting everything away late into the night ready for the college to go back to ordinary working order the next day.

Overall, the day was incredible the voluntary efforts from everyone truly shows how much the college community cares for one another on such a special day. Comments such as “Best Trevs Day Ever” were completely unsurprising.

Hi, I'm Lydia Edwards, I've recently completed a postgraduate course in Management and a member of Trevelyan College. In my spare time, I play netball and rugby, whilst also having a keen interest in international development and current affairs.