#thisgirlcan – from Durham to Team GB

Getting involved in hockey

My first real introduction to hockey came when I was about 11 and I switched from club rugby to Cambridge City Hockey Juniors, playing on Sundays. So, I guess I’ve had a hockey stick in hand for around 8 years. What first made me fall in love with the game is that anything can happen. You can score, win or lose in seconds and it doesn’t matter where you are ranked. Hockey is a very special and unique sport. I love it because you can be free – the rules of the game are designed to allow for team and individual flair. It praises diversity, individuality, creativity, hard work, teamwork and cooperation, skill, intelligence, tactics, sportsmanship, grit, determination and passion. It has everything.

Training is one of my favourite parts of hockey. With the purpose of getting better, I train over 7 times a week including team pitch sessions, individual pitch time, gym sessions, recovery, and mental and visualisation training. It’s non-stop in peak season. I often joke because when you combine Club and International hockey, the “off season” is usually “peak season” for each other. Whilst training hard for the University Hockey team DUHC, as a GB Development player, I also have high intensity training camps every few weeks. 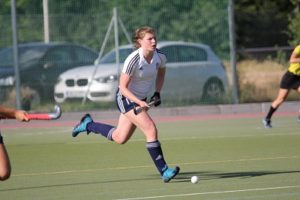 Now becoming a Full-Time Great Britain Senior Athlete, I will be centrally based in Bisham Abbey training on a pitch with the squad 4-6 times a week plus in the gym.

To reach such a high competitive level, you have to approach each training session with a mindset to improve and perform. I learned this early on when I used to travel hours, with my heroic mum, to regional centres to train. I knew there was no point me turning up and not working hard or being switched on. I was also very fortunate to live close to my school, The Perse, as I would stay on the Astro after school for hours and just play by myself – headphones in listening to music – and I would practice and practice because I loved it. I couldn’t think of a better way to end my day: training. 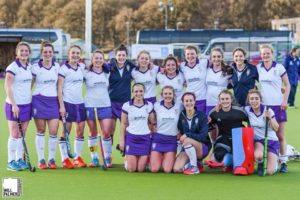 As I have got older I have more appreciation for the athletic abilities required in a GB Hockey Player: agility, speed, endurance, strength, stamina, robustness. Training in the gym with the help of Durham University’s facilities has made huge impacts to my game. I know the training I do in the gym has direct results on the pitch and is now integral to my game. The world-class facilities at Bisham Abbey NSC are central to the GB hockey athletes achieving our fitness and strength goals, and I am very excited to continue to use the Elite Gym to improve.

Team Durham have been very supportive over the last year as a Palatinate Scholar, but particularly the last month in helping me manage moving into a Full-Time programme, firstly for GB Trials and then to be able to accept a Full-Time Contract. Durham University Hockey Club as their own entity has been extraordinary. DUHC is my second family and they have supported me ever since joining as a Fresher. The pastoral element of DUHC comes from the players and the coaching staff and has been invaluable in helping me progress my hockey career. 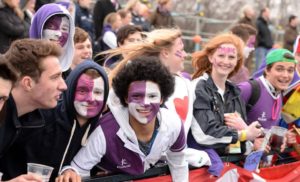 My favourite memory is probably last year, quite early on in the season. Durham University Hocky Club (DUHC) beat Loughborough 7-1. An all-time record. It was a creative, confident performance from the team and it all started in the changing room chanting “I know a dog”.

Playing for GB in the Champions Trophy

To be honest, I keep pinching myself that this is real because I just think of my 11-year-old self, dreaming of being part of the U16 England team. The escalation since the moment I first sang the national anthem, and to walking through the Home World Cup gates this summer, into the Stadium – the home of hockey – and just knowing: this was what it was all about, is what has driven me and continues to drive me. I didn’t think my opportunity would come just a few months later.

I am most looking forward to playing alongside my GB teammates. The team is powerful and exciting, made of such formidable players, some who were part of the GB team who made history in Rio, and I feel very privileged to play in this team. The Champion’s Trophy is a special event bringing together the best of the best, so I am really looking forward to playing against the top teams in the world: Argentina, the Netherlands, Australia, China and Japan. It’s a fantastic opportunity to learn, develop and be free to express myself – it will be an experience of a lifetime!

Ambitions with the sport

I want to become the best hockey player and athlete I can become, to realise my potential wherever that leads me. My dream is to be a valuable member of the squad contributing to the success of Great Britain and England in major competitions, and ultimately play in Tokyo alongside powerful teammates. Fundamentally, I want Great Britain to defend the Olympic title successfully in 2020 and I aspire to be a part of the squad that makes it happen.