It’s 6.30am on a Monday morning. November.  It’s pitch black outside, freezing, and the bin-men have hardly finished collecting the rubbish. You’re about to get a lift – if you’re very lucky – or perhaps even the X12 bus; if you’re a fresher, you’re probably walking under the streetlights, without a car in sight. You’re off to Maiden Castle for a gym session before the day has even really begun, and you still have a day of lectures and evening training to look forward to…

You and your teammates travel in silence, half from tiredness, and half from the cold, as you both repeatedly ask yourselves:
‘Why am I doing this, again?’ – a question every Palatinate member asks themselves at least once – and, most likely, several times – during their time at the club, be it after their alarm goes off for morning strength and conditioning, while stood in the sleet and the rain during a particularly gruelling training session, or even while travelling back from a distant away fixture, having lost the game.

My path to becoming a Palatinate is a fairly well-trodden one. A promising player at school level, a couple of unsuccessful flirtations with

academies, followed by an ‘education or rugby?’ crossroads. With little hope of making it professionally, I felt coming to Durham – and playing for DURFC – would give me as good a balance as I could hope for; academic prowess combined with a high standard of amateur rugby. While there are several others in the club who have walked in my shoes, my journey to the club is not the only one to speak of. There are some, increasing as the years go by, who become a Palatinate to acquire an outstanding education on their route to a bright rugby future; most notably, your Simon Hammersleys, Sean Robinsons and Josh Beaumonts, who will undoubtedly be succeeded by Adam Brocklebanks, Justin Cleggs, Diogo Hasse-Ferreiras and Nathaniel Opedos in the future. Likewise, there are other Palatinates at Durham who applied to the university for a variety of reasons outside of rugby, but can’t resist chasing the egg on a regular basis anyway.

What unites us all, clichéd though it may be, is a love for the game, felt from the 1st XV all the way down to the 5th XV; the impressive number of squads we field can attest to this fact. In addition, and while some members may be slow to admit it, there is a residual, and sometimes reluctant, love for the club, its members, and its legacy; any fresher will tell you that there’s something awe-inspiring about pulling on the palatinate jersey for the first time, and any finalist will tell you that this novelty never truly ebbs. Despite the sacrificed hours, it is for these very reasons that Palatinates choose to be Palatinates. The Wednesday nights, it’s worth adding, take care of themselves, regardless of the day’s results, although all Palatinates would agree that there’s nothing quite like celebrating a ‘Winning Wednesday’. 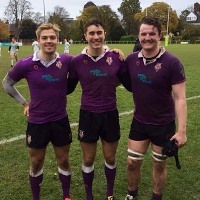 Playing rugby at a comprehensively top level is privilege that few rugby clubs other than DURFC can boast, not only concerning the 1st XV’s strong performances in the new BUCS Super League, but also with reference to the 2nd, 3rd, 4th and 5th XV, all of whom are comfortable competing against 1st XVs from other universities; the 3rd XV’s battle to the final of the Conference Cup in 2015/16, for example, will surely go down in Palatinate history. This culture of quality is essential to the club’s success as a whole, yet it is somewhat secondary to the social aspect that the club culture provides, as many of the friendships forged in the copious hours of training and playing transcend university and continue on into later life. It is this eclectic and unique mix that forms the basis of being a Palatinate, an experience that all those who are fortunate to take part in at one time or another will look back on fondly.