The Mining Past of Durham 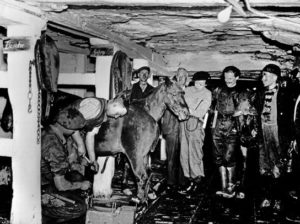 For centuries, the character of our area has been dominated by mining. Looking around the county, you can see remnants of the mining past and artefacts such as the safes in buildings which the pitmen were paid. If you look at the place names of villages surrounding Durham, these names are indicative of mining, such as Easington Colliery or Esh Winning.  A ‘colliery’ is defined as a coal mine and a ‘winning’ in mining is an excavation of coal.  Some houses in these areas of Durham have storage for when some of the pitmen were given an allowance of what they mined. 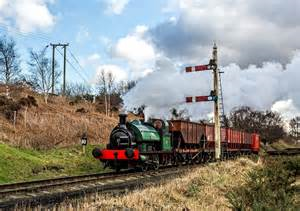 Whilst the mines have closed, there are still remnants of the mining past which are worth visiting, such as Tanfield Railway which runs steam trains on some of the old colliery tracks which you can go on, very enjoyable! There are also the ‘railway paths’ which are excellent for off-road cycling, locally referred to as ‘the lines’. Read my other blog about cycling along the lines, they are not far from the city centre and were were used to transport coal from the pits.  Another great day out is to be found at Beamish Museum where you can experience going down a mine with an oil or gas lamp and be immersed in what these pitmen went through in their job.

With the Miners Gala happening on the second Saturday in July every year thoughts of the pits and the Miners’ Strike are very much in the minds of the local people. Most of my neighbours in the village where I live are ex-miners. Since 1871 the Gala has celebrated trade union collectivism, community spirit and international solidarity, it gets bigger and better each year.  You can see many of the association and trade union banners, which usually take pride of place in community halls.  You can hear the colliery bands belting out their rousing tunes and watch the procession.  Last year, this attracted over 150,000 people.

Traditionally, the colliery bands would march through their villages starting very early in the morning and then make their way to Durham from all directions and, in the main, that tradition still exists today.  The main assembly point is the Market Place and bands and banners start to march from there to the Racecourse from about 8.30 am. Other assembly points are the Miners’ HQ at Red Hill near the railway station and the New Inn on the west of the city. 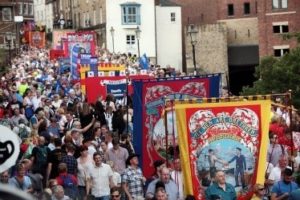 The focal point of the Gala is the County Hotel at Old Elvet where the two legs of the procession converge. Here, the union leaders, invited guests and local dignitaries greet the march from the hotel balcony and the bands pause to play their “party piece” before marching the short distance to the Racecourse where there is a platform for the speakers.

The work-ethic of the local people has been passed down through generations. Even though the mines are closed, we have all been taught the value of honest work, an attitude that is useful for studying Physics too!