Each year the Faculty of Science hold the Women in Science Annual Lecture. Previous speakers have included Dame Jocelyn Bell-Burnell, who gave a talk on her discovery of pulsars, scientific career, and experience as a woman in science. In fact, Dame Jocelyn was one of the people behind the Athena SWAN charter, which has been monumental in the promotion of equality and diversity in academia. Originally the Athena SWAN charter was established to recognise commitment to advancing the careers of women in STEM fields. Now some of the key principles of the charter are to address disparity in pay, tackle discriminatory treatment of trans people and advancing gender equality in academia. Currently Durham holds the Bronze Athena SWAN award at the institution level. 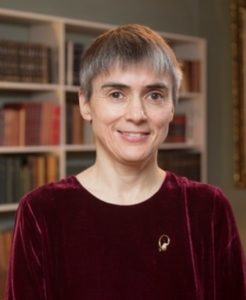 The 2018 Women in Science Annual Lecture was given by Professor Dame Ottoline Leyser DBE FRS, Director of SLCU, University of Cambridge and titled The Joy of Being Wrong. As well as being Chair of the British Society for Developmental Biology and part of the Royal Society’s Science Policy Advisory Group, she has received multiple honours and awards such as the Royal Society Rosalind Franklin Award and the UK Genetics Society Medal. She was awarded a DBE in the 2017 New Year Honours for her services to plant science, science in society, and equality and diversity in science. Her pioneering research is based in the genetics of plant development and the influences of the environment, particularly in the role of hormones such as auxin. Her work has helped to explain how plants react to their environment and the role of hormones in this process. 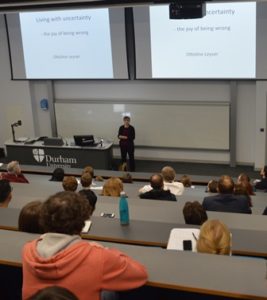 ly enjoyed her talk on The Joy of Being Wrong, which illustrated the importance of diversity and inclusion in science. She began by discussing the fear of uncertainty that occurs in many of us. This is particularly true of science as, contrary to popular belief, it is not straight forward or linear and often yields unexpected results. Professor Leyser discussed the damaging misconception that scientists are “boffins”- superhumanly intelligent individuals that are also sub-humanly robotic. She states that this stereotype can prevent diversity in the field as many “normal” people believe that they do not fit these criteria and therefore should not bother pursuing science. The idea that the field should be reserved for “boffins” can reduce the diversity that is so needed in science. Diversity in the discipline is essential as different individuals will come up with a variety of solutions and ideas, particularly if these ideas and solutions vary from your own.

A piece of cake?

Contrary to popular belief, science requires a great deal of creativity and imagination in order to come up with new ideas and solutions to problems in the scientific process. Experiments and research don’t always go to plan and, while this can often lead to more interesting results, creativity is essential to solve these problems. Professor Leyser eloquently summed this up with a cake analogy; if you bake a cake according to a recipe and it does not come out right, you think of what variables may be affecting the cake and what you can do differently next time until eventually you solve the issue. The cake recipe is the scientific process, following a set of instructions to (hopefully) achieve the desired outcome. Just like anyone can follow a recipe, anyone can do science.

A recording of the lecture can be found at:  www.durham.ac.uk/science.faculty/athena.swan/wislecture2018/