Oddly, Durham was the place I first had Thanksgiving. I have no American roots and only a vague idea about the origins of Thanksgiving. But for the second time in two years, I settled down to a very large meal among a very large number of friends on the fourth Thursday of November and was incredibly thankful for it. 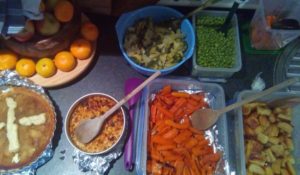 I was mainly thankful that it was not me arranging the twenty-person meal involving the carrying of extra tables across Durham; the coordinating of several different chefs; and attempting to arrange our living room into a feasible dining space. A 20lb turkey was defrosted in a bin and squeezed into our small student oven, vegetables and potatoes were roasted in kitchens across Durham, and three different types of pie sat wafting wintry smells from the side. All this was down to the organisation of my wonderful half-American housemate.

Several others at the dinner had American connections, and that is what is so amazing about Durham. I came to this city buried in north-east England and ended up meeting people from all over. Looking down the tables and managing, for a moment, to take my eyes from the food, I thought about how very different everyone in this room was: different faces, different subjects, different origins, different characters, but we were all here around the same table(s) enjoying the same food. 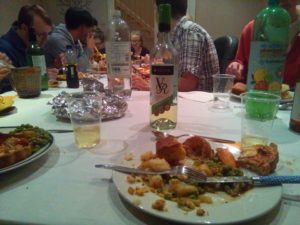 We ate and talked and each said what we were thankful for. I’ll admit that last bit makes me nervous: I don’t like speaking in front of everyone, but it brought out such touching responses, that it was worth the slightly teary eyes afterwards. I was thankful that our house was a lot bigger than last year’s so that such a lovely range of people could be brought together at the same time.

As the evening drew to a close, I slipped into the kitchen to wash and tidy up. Considering the effort that had gone in by those with the patience and talent to cook such an extravagant meal, this was the least I could do. Washing up twenty plates and bowls and a whole load of kitchenware (or at least stacking and restacking the dishwasher) was my way of saying thanks. 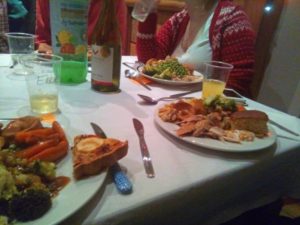 Thanksgiving to me was like a Durham Christmas; a Christmas spent with people related by the university rather than blood; a pre-Christmas Christmas which was all about spirit rather than presents.