The EAGLE has landed at Lumiere 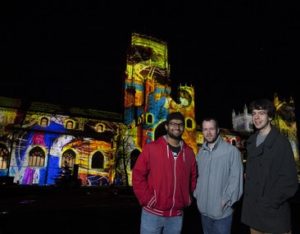 The Institute for Computational Cosmology and Durham University are no strangers to putting on a light show.
Last time round at Lumiere 2015, a team of us at the ICC were heavily involved in the creation of ‘The World Machine’, the centrepiece exhibit of the light festival. It told the  tale of the history of cosmology starting from the 13th century and leading right up to our current understanding, which was showcased on the side of Durham Cathedral – getting to see your work presented in that way is pretty neat! 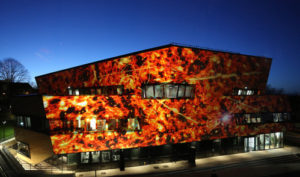 Then as part of the celebrations for the opening of our new building, the Ogden Centre for Fundamental Physics, we projected a spectacular show onto the building, highlighting the life of our own home-grown astronomer, Thomas Wright.

This Ogden Centre building, which my niece could only describe as “squint”, is the new residence of three of Durham Universities astronomy departments, including the ICC, and is truly a fantastic place to do world leading research.

Its unique shape will be the backdrop for this year’s Lumiere show.

What’s this year’s show about? 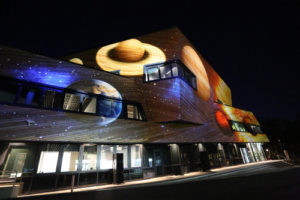 Our lightshow for Lumiere this year, connects the architecture behind our new building to the architecture of the cosmos, in a mix between art and science. Our building was designed by the world leading architect Daniel Libeskind, and the lightshow will try to convey some of the meaning behind its design.

It will also be a showcase for some of the work that we do within the building, including simulations of exploding stars, simulations of our own Milky Way and even synthetic versions of the entire Universe, or at least large chucks of it.

How am I and other students involved?

I am a student at the Institute for Computational Cosmology, better known as the ICC, entering the 4th year of my PhD. 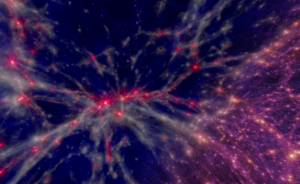 I work on a project named EAGLE, or the Evolution and Assembly of Galaxies and their Environment if you have enough time to say it, which is one of the most accurate large-scale simulations of our Universe ever made. Its goal is to investigate the simultaneous evolution of tens of thousands of galaxies from all the way back at the Big Bang up to today, to help us decipher the important astrophysical processes that govern our Universe.

For instance, I study the evolution and behaviour of supermassive black holes, the extremely compact objects that reside deep within the centres of galaxies, to see how they affect the behaviour of their host galaxies. It turns out that the energy that is given off from these relatively small blobs of matter can actually be quite destructive, and we have come to accept them as key ingredients in our understanding of the Universe.

During my time at the ICC however, I certainly did not envision that I would also be producing imagery for shows at the Lumiere Light Festival!

Speaking as a previous visitor to Lumiere, I cannot recommend enough braving the chilly weather to come and see it. Don’t miss out…..save some time to visit our show at the Ogden Centre and the other installations located on the University’s science site.