The Durham Revue is the only student comedy sketch troupe in Durham. It’s older than you, unless you were born before 1974, [in which case, congratulations], therefore making it really quite special. In the 45ish years of its existence, The Durham Revue has boasted many members including the immensely famous Neil’s Dad from The Inbetweeners (Alex MacQueen), the inimitable police officer from ‘Allo ‘Allo (Arthur Bostrom), That Geezer What Does the Radio (Jeremy Vine), as well as still living comedians, Nish Kumar and Ed Gamble. If it wasn’t for The Durham Revue, these people may not exist.

To celebrate ourselves, this year The Revue gained the generous help of Durham University to organise the first and last ever 45ish-Year-Anniversary-Durham-Revue-nion. Although the future members of The Revue weren’t invited, four decade’s worth of Durham Revue comedians were reunited at The Bridewell Theatre in London for an evening of cheese, wine, and chat, as well as a showcase of sketches, stand-up, and silliness, from treasured graduates of The Durham Revue. The event, like so many amazing things, was dependent on a single throw-away comment; “You Revue guys should get together and do some sort of reunion. You’ve got loads of interesting alumni” … The seed was planted. A few coffees, a little networking at events and several hundred emails later, we had a date, a plan, and something special on the horizon.

If the definition of success were ‘lots of people with at least one thing in common having a bloody good laugh’, then the event certainly deserves that label. It’s not every day that one gets to introduce The Lord Justice of the legal system to Jeremy Vine, before breaking bread with comedian Tim Fitzhigham and getting a photo with every President of The Durham Revue for the last ten years. But perhaps this is what makes revues like Durham’s special. We have built a history of fun and friendship over 45 years, that is still being carried on. 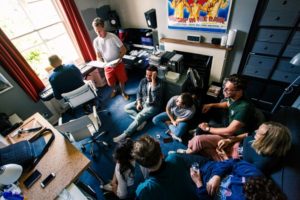 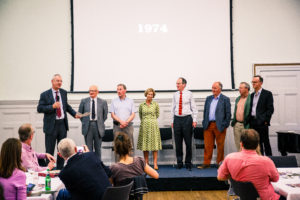 A review of my Durham Revue

I’ve been in The Durham Revue for three years, this being my last; it has been single-handedly the biggest and best commitment I’ve had at Durham. Of course, everyone says that about their society – and so they should, it’s good for PR! But being in The Durham Revue has trained me for a career in comedy when that three years ago,  I’d would barely have even considered. In my short three years, we’ve done shows in Durham’s Gala Theatre with professional comedians, we’ve done shows with the  Cambridge Footlights, The Bristol 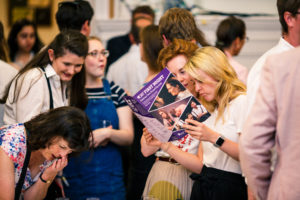 Revunions, The UCL Graters, and St. Andrew’s, we’ve done shows at Oxford, Cambridge, Leeds, The Edinburgh Fringe Festival, and now, London, and each and every one has been ridiculous fun.

After a time, you start to realise that this doesn’t have to stop after you’ve shaken the Chancellor’s hand at graduation and driven home for the last time to Guildford. I have many friends from my time in the Revue, and many of us have been inspired to continue writing and performing our own brands of comedy in the future; we all have our time in The Durham Revue to thank for that. And so could you! If you are a student/prospective student. Audition for us in October.