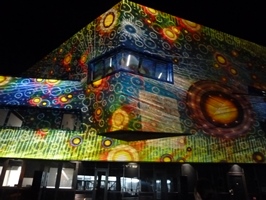 The Odgen Centre for Fundamental Physics will be officially opened today and to mark the occasion there is a celebration of astronomy which includes a spectacular light show projected on to the new building. I went along to see the show last night and it really is amazing!

The light show is entitled Worlds, Systems & Creations and features some of the actual computer simulations made at Durham University’s Institute for Computational Cosmology. The projection also features a range of imagery, including celebrating Thomas Wright, the 18th Century astronomer, mathematician and architect from County Durham who first described the shape of the Milky Way. The music and imagery work really well together and, as well as being stunning, allow viewers a brief glimpse into the history of astronomy. 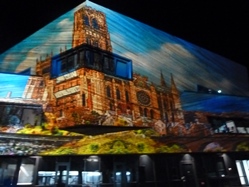 Staff and students from the University’s Institute of Computational Cosmology have worked with artists Ross Ashton and Karen Monid, to create Worlds, Systems & Creations, with music by Isobel Waller-Bridge. This is a similar project to The World Machine, the light show projected onto Durham Cathedral during the Lumiere festival in 2015. Anyone who has seen Lumiere, will know to expect something special and if you haven’t seen Lumiere you can look forward to it happening later this year when the festival returns in November.