Following our visit to the International Commission for Missing Persons, we headed to Srebrenica (see Remembering Srebrenica part 1). The site of Potoćari (the base of the Dutch peacekeepers during the war) it has been converted into a memorial, a museum and multi-media suite built to commemorate the dead and remember the genocide. 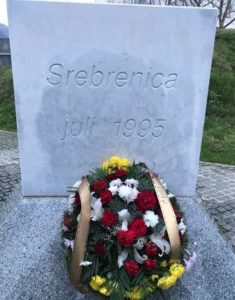 For all of us, this visit was very hard-hitting and brought the genocide close to home. It included a photo exhibition about the genocide and offered us an insight into the events that occurred and the experiences of different people at this time. This was very insightful for us and demonstrated how little we knew about the event before and after the war.  One of the stories referred to a Srebrenica survivor who managed to escape through the woods to Tuzla, whilst his brother didn’t survive the journey. The combination of such stories and video from the time, including the execution of six Bosniak Muslims, was particularly shocking to witness.

What we learned here relates to our courses in many ways, but what stood out for us was the role of international organisations in conflict and issues of transitional justice post-conflict.  The fact that Srebrenica was a UN-protected safe zone was shocking to us and it made us question the issue of international intervention during the conflict. During the war, the international community did very little and it appeared to have a lack of will to ensure the security of civilians and peacekeepers. This resulted in a division between peacekeepers and refugees with an, us and them culture. This also raised questions for us about when and how interventions can be used, and how the institutional process can cause problems with action on the ground.

This visit also made us question issues of transitional justice. Of its four pillars – justice, truth, reparations and guaranteeing non-re-occurrence – the government focuses only on the provision of criminal justice. Although the creation of the museum and memorial sites are a vital aspect of Transitional Justice, Bosnia and Herzegovina focuses on the provision of criminal justice, through prosecution of war criminals at the International Criminal Tribunal for the former Yugoslavia (ICTY) and in national courts. As a result, it ignores other issues and the provision of other forms of justice.

It was clear from our visit that there is a lack of other aspects of transitional justice, as local people are still affected by what happened. Compared to before the war, the town of Srebrenica’s population has shrunk by over 30,000, and its thriving industry has been lost. For those that returned to the town, we questioned how they deal with life when 2 decades ago they were victims of the horror that occurred. In addition, the town sits in the Republic of Sprska where we discovered discrimination towards Bosnia’s is still prevalent today with little efforts made to provide support for these survivors.

Whilst this day was emotionally draining it gave us an insight into the real horrors this war encountered. Our experience has been unforgettable with respect and commiseration towards the survivors of this war. It questions human morality and shows any individual could be capable of such atrocities if the situation presents itself. This day has contributed internally and externally towards our research and explains how division and fear can turn individuals against each other. The approach we understand to put forward for a more integrative society is to break down the cultural barriers and look at the similarities rather than the differences that each of us holds.

This blog was written by Maria Savvides, Alexandra Craggs, and Aleksandra Kruk all studying Masters in Diplomacy, Defence and Development, or Masters in Conflict Prevention and Peacebuilding.

The views expressed in this blog reflect the experience of the DGSI students on this trip, they do not necessarily represent the views of the DGSI.