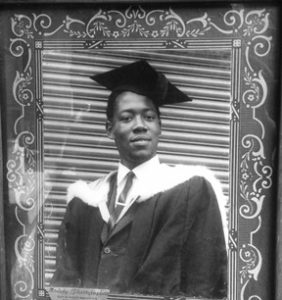 It is an honour and privilege to join the Durham University family to celebrate 50 Years of my graduation. My degree (BSc. Geology and Chemistry) set the foundation for my post-graduate studies, professional attainments and my life’s journey through academia, leading to the Principalship of the oldest institution of higher learning in West Africa (Fourah Bay College, University of Sierra Leone) and Pro Chancellor of the University.  Throughout my career I served in several academic positions all over the world. Outside academia, I served as consulting Geologist to many national and multi-national companies and held several Directorships and Chairmanships in many companies and parastatals.   I am currently Senior Director at the Strategy and Policy Unit and Senior Presidential Adviser to the Government of the Republic of Sierra Leone.  My contributions to academia and national development earned me national recognition and one of the highest state awards (Commander of the Order of the Republic of Sierra Leone, CRSL).
I have been married for over 44 years now to Gladys, and we have four children.

I believe that the positions I have held is a testament of Durham’s rich training which has enabled me to seamlessly explore areas outside my core discipline.

I shall always be proud of my degree from such a world class institution and to be a part of the Durham’s story. 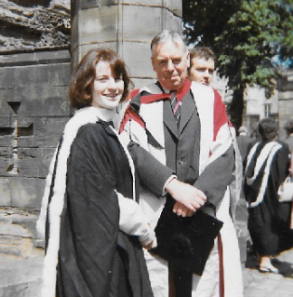 I read for an Honours degree in Theology and was tutored by Professor CK Barrett, with whom I am photographed, on graduation in 1968. My career has been in theological education. I was among the first women to be a diocesan Adult Education officer, later becoming Assistant Director of the North of England Institute of Christian Education, here in Durham. Latterly, I was on the faculty of St. John’s Theological College Nottingham, where I lectured in New Testament and NT Greek to women and men training for ordained ministry in the churches.

For 20 years I was a member of the General Synod of the Church of England -the first decade concentrating on matters relating to ministry especially selection and inspection, in the second decade she was Vice Chair of the (national) Council of Christian Unity, taking part in Conversations with other churches. I became a member of the panel of Chair(men) and as such chaired Synod debates. For 13 years  I was a moderator of the Conference of European Churches Commission Churches in Dialogue, in which capacity I met Pope Benedict .

After retirement, I was elected President of St. Mary’s College Society, and as such am still happily very involved with the College.

Helen and I went up to Durham to study German in October 1964. Helen was following in the footsteps of her parents, who had both studied German at Durham in the 1930s, while I was the first from my family to go to University and, brought up in Hampshire, was going to a part of the country which was completely unfamiliar to me.

Our cohort was one of the earliest to benefit from the expansion of university education in the 1960s with tuition fees paid and a maintenance grant of £340 pa. New universities were founded and existing ones were growing. In Durham new colleges opened and existing ones expanded. There was a shortage of accommodation and in my first year I had a room in the mining village of Langley Moor. I remember coal dust blowing down the street and the Salvation Army band playing outside my window on Sunday morning, but also the warmth of the mining community.

In our time in Durham we saw the building of the new teaching facilities at Elvet Riverside and the Students’ Union amenities at Dunelm House, now I gather both threatened with demolition. In our first two years lectures were mostly held in huts behind the Dun Cow pub in Old Elvet and the Students Union canteen and coffee bar was in old shop premises in the same street.

We both went to Germany as teaching assistants for our third year and were able able to see quite a lot of that country. It was remarkable to see how towns and cities had been rebuilt in the twenty years since the end of the war. There were American occupation forces stationed both in Darmstadt, where Geoff was, and in Bad Kissingen (North Bavaria) where Helen was, and Helen can remember the tanks rumbling down the streets early in the morning.

One of our trips in 1967 was to West Berlin. The government was keen to encourage people to travel to West Berlin, effectively an island in East Germany, so for foreigners travel was subsidised. We travelled by bus on one of the three permitted motorway routes from West Germany. Vehicles were forbidden to stop or leave the motorway and transit times were closely monitored.

We married in 1970 and moved to Reading where Geoff was completing his Chartered Accountant qualification and Helen was teaching. Subsequently we moved to Wharfedale near Leeds. Helen taught German for many years at Leeds Girls High School and Geoff worked for more than twenty years for the UK subsidiary of a German kitchen company, thus allowing him to use both his skills.

One of our daughters became the third generation in the family to study German, but at Oxford rather than Durham.

Returning to Durham occasionally we find it much changed, but it is always nice to return to the core area particularly down South Bailey where Geoff spent two years and where everything still looks very much the same. 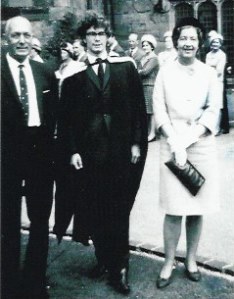 I have had a lifelong interest in industrial archaeology and enthusiasm for railways and canals. After attending King Edward VII School Lytham, I studied Modern History at Durham University, specialising in the economic and social impact of the Industrial Revolution in Britain. I was President of Durham University Railway Society and a founder member of the Industrial Archaeology Society. I have worked as a cafe assistant at Fairhaven Lake, as a librarian in Preston , an archaeologist at Winchester, a gardener in Essen, Germany and a hot dog seller on the Golden Mile, Blackpool.

I live in Newport with my wife Jill and have three grown up children. Not surprisingly my hobbies are still railways. I am co-author of  ‘From Lancashire to Yorkshire by Canal ‘ and author of ‘Secret Newport’, both published by Amberley Books

After finishing my degree, I became a medical physicist at Newcastle General Hospital, initially for the NHS. I was lucky enough to be able to do research for Newcastle University in technology applied to clinical medicine, for which I received a PhD.

After taking time out  to have a family, I changed tack and joined Durham University working with the deaf students in 1982. This was a unit unique in English residential universities, to enable deaf students to study in HE, and it was  funded for 12 students. Initially I only worked a few hours as needed during term-time, but more students came for help, including those with other disabilities. My role increased in hours and responsibility. Numbers rose to over 70 in 1993. At that point, the service was overhauled to become a pan-disability service and I became its Director. When I retired in 2007, there were well over 1,000 students using the service with many different physical disabilities, mental health difficulties, medical conditions and developmental and dyslexic problems. I loved this work and oversaw the implementation of the DDA into HE at Durham during my time.

Since retirement I’m busier than ever in local community work and I still continue my involvement with Finchale.org, formally Finchale Training College for the Disabled. Sometimes I feel I’m ready to retire – again – but not yet!

Find our more about Winter Congregation and the recipients of Honorary Degrees.

Watch the Graduation ceremonies online as they are live streamed from the Cathedral.