Iz Tarsh is the current President of Jewish Society, having been Vice President last year. Growing up she engaged with many different levels of Orthodoxy within Judaism, eventually settling in at a Reform synagogue in London. There she taught at religion school, took on volunteering, and engaged in a programme for creation of conversation between Jewish and Muslim teens. It was at this point that she really became passionate for interfaith work, which has pushed her to help create a National Interfaith Week programme for Durham. 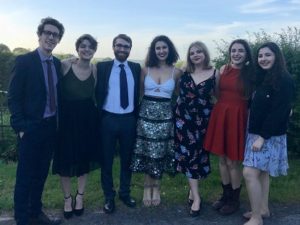 “Coming to study at Durham, I wasn’t coming here specifically for a Jewish social life, but in the Jewish society, I have found some of my closest friends, as well as a community I feel so privileged to be a part of. What is notable about Judaism is culture and joint values are generally more important than religious views or practices (at least to a reform Jew like me), and this means that our community can easily thrive within a university setting, despite not having a synagogue in Durham. Through our Friday Night Dinners, Lunch and Learns and festival socials, we have been able to provide a space for Jews in Durham, some of whom have very little chance to explore their religious identity at home. Equally, we become a familiar community for those who are active in Jewish social life at home, so there really is something for everyone.

In terms of interfaith, after working on a programme for conversations between teenage Muslims and Jews, interfaith is something that I hold close to my own understanding of religion. That is why being able to organise National Interfaith Week events on campus has been so important to me. Particularly coming from a minority religion (in the UK and in Durham), it is such a privilege to help people learn more about Judaism, or to even be their first introduction to a different religion. I am also very excited to learn more about how students of other faiths practice their religions and build their own communities within a university structure, and I have thoroughly enjoyed working with the other presidents (all of whom are equally enthusiastic and excited) to put together a plan of action for National Interfaith Week.

Visit the Chaplaincy and Faith Support webpages to find out more about what Durham and the surrounding area has to offer in the form of faith support and different faith communities.