Here is what he had to say: 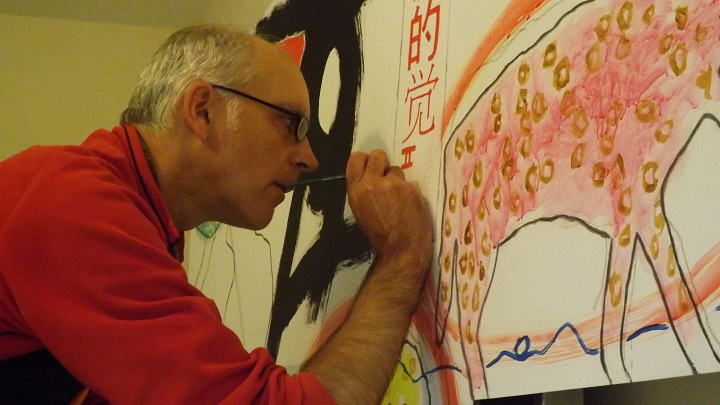 How long have you worked at Durham University?

I have been artist/writer-in-residence here since October 2015. I share my time between Josephine Butler College and St Cuthbert’s Society and have been living on-site at both colleges. I’ll be staying until the end of September 2016. I was previously an artist-in-residence at Ustinov College during the 2012-13 academic year.

What does your role as Artist/Writer in Residence entail?

The role is very broad and flexible. I am free to pursue my own on-going creative projects, but the colleges also hope also for a stimulating and creative interaction with students and staff. This might involve giving talks, running workshops, creating permanent artwork for display or setting up creative initiatives or performances.

Did you always want to work in art, or did you want to do something else?

I have been driven to be creative since the age of three, but also have a passionate general curiosity about the world around me. My first degree was in history and political theory and I then became a teacher hoping to inspire that curiosity in others, all the while nursing the desire to create. In 2003 I gave free rein to that desire and began working full-time pursuing creative projects. Education still plays a part in my work as I also occasionally deliver creative workshops and lectures on art history and literature topics.

What are some of your most notable projects you have done while at Durham University?

In 2013 I created an eight-metre wide site-specific painted triptych on aluminum panels for Ustinov College entitled “The Ariadne Frieze” (pictured above). This was a fun and ambitious project and involved collaboration with students, including a dancer who modelled via stop-motion film for a multiple-figure of Ariadne. Another exciting project that year was a performance-poetry event with projections and improvised cello from a postgraduate music student.

Currently, I’m involved with students from both Josephine Butler College and St Cuthbert’s Society on a collaborative art installation project for Durham Botanic Garden. The work commemorates the 70th anniversary of both the start of nuclear testing at Bikini Atoll and the naming of “bikini” swimwear, and will be on view to the public from June 16th to July 25th.

Are you working on anything right now?

Apart from “The Bikini Line” I am working on projects of my own. In March-April 2017 I have a solo art exhibition in Manchester Cathedral based on a long-term project involving creating painting inspired by letters I receive from a British inmate in New Jersey’s Fort Dix Prison. I have four large additional paintings to prepare for the show. For November 2016 I’ve also been asked to develop an art concept celebrating the 30th anniversary of the Durham World Heritage Site.

As writer, I’m collaborating with German classical composer Soren Nils Eichberg. We are waiting to hear whether we have been successful in gaining a commission for completion of an 18-part song-cycle for baritone and symphony orchestra. The hour-long work will be based on poems I’ve written inspired by “Alpha and Omega”, the 1908 print series by Edvard Munch.

As a lecturer, I’m about to travel as “Guest Speaker” on a cruise circumnavigating Iceland.

Do you have any major ambitions for your work in the future?

I’m hoping to continue working with Soren to write the libretto for a full-scale opera – a very longstanding ambition! The subject-matter is under wraps but I can reveal the title: “Count Co-Co”. I also have ideas for further ambitious art installations.

Where is your favourite place in the University?

The Norman Chapel in the castle is truly breathtaking. I also like the broad walkways of the Science Site with both its eclectic and cosmopolitan-feeling architecture and the presence of Fenwick Lawson’s captivating sculpture “Cry for Justice – The Scream”.

What do you wish students understood about what you do?

That creativity is a vital facet of human existence and that everyone can be creative. Every person’s creative voice is equally valid in this universe.