On 7 March, Durham University welcomed Astrophysicist Dame Jocelyn Bell Burnell as their guest Women in Science lecturer for International Women’s Day. Her talk, titled Careering through Astronomy, was about her journey from early education to her scientific achievements, most notably the discovery of pulsars, as well as her work to aid women’s education with the Athena Swan Award.

As a young woman studying science, her speech was very poignant, especially her anecdotes about her early education. After initially failing her 11+ exams she later went on to be top of the class in physics, despite being previously denied this opportunity as girls were not expected to do science. She told of her experience at university as the only female in a male dominated Radio Astronomy course and of the extra work she had to put in as a woman in a man’s world. 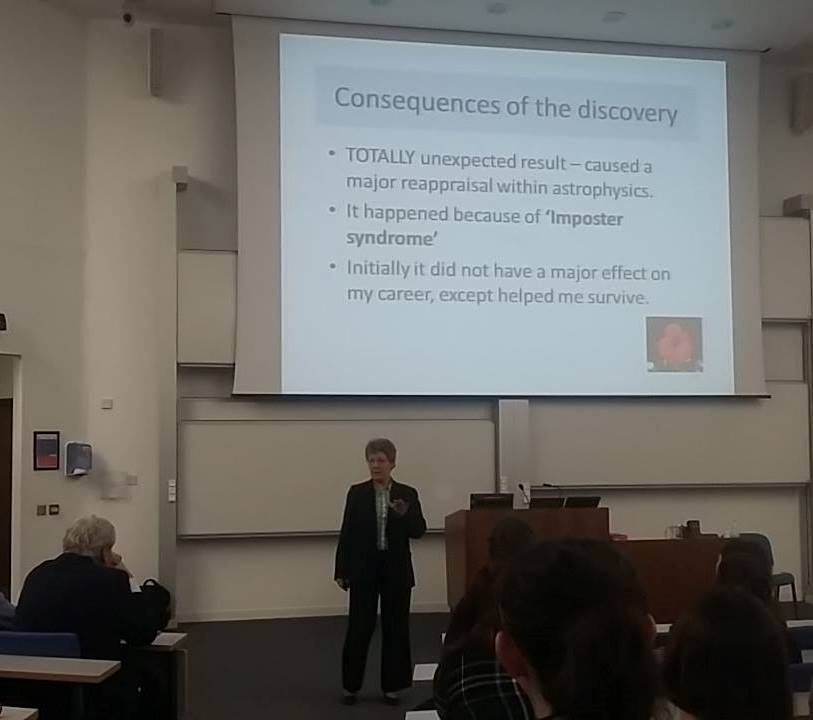 Even after her ground-breaking discovery of pulsars, more people congratulated her on her engagement than her scientific achievements, as women at the time were expected to be wives not make astrological discoveries. She continued working after marrying and having children despite the norms of the time, especially with scarce childcare and the expectations placed on married mothers.

During her visit I had the chance to speak to Jocelyn and ask her a few questions about her experiences as a Women in Science:

What made you decide to study astronomy?
It was clear that I was good at physics right from when we started. Through my teens I was wondering what branch of physics I might go into. Then I read some library books about astronomy and was hooked!

What has been your experience as a woman in science?
Women doing any kind of work were rare when I was young.  I have been the only woman, or the most senior woman in the work place for all my life. I was the first female President of the Institute of Physics and now I am the first female President of the Royal Society of Edinburgh (founded 1783)!  Things have changed hugely since I was young, and now there are many more women in science.

If you weren’t a scientist what would you like to be?
A scientist!

Do you have any advice for young women that would like to get into science?
Go for it! But, as in any field, you’ll need some persistence and determination – things don’t usually drop into your lap.

Her incredible achievements are the result of life long hard work and determination, and she is an excellent role model for aspiring female scientists. However, there is still a long way to go to bridge the gap and remove sexisms and prejudice from the study of science, especially in perceived male dominated fields such as physics.