I never thought that I would be learning Japanese this time last year.  I have taken classes at Teikyo University here in Durham, which is an active branch of the Teikyo University Group in Japan. Every year students from Tokyo come to Durham to improve their communication skills and learn English, they offer Japanese classes to students and the local community.  I have found it a highly enjoyable experience, although my hopeless attempt at Kanji (one of the 3 Japanese alphabets) will probably stay with the teachers and myself for years to come. 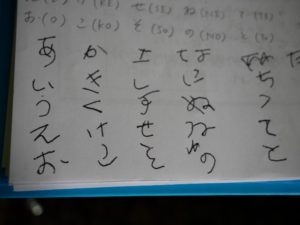 My attempts at Kanji

What I enjoy about the classes

The classes are perfectly infused with elements of Japanese culture making this is a truly authentic experience.   The classes are taught by Japanese students in the UK learning English, this has given me a good insight into the challenges they face.  I am struggling with Japanese, and there is a good sense of comradery as we are all struggling together!   I have made friends with other students and we learn about each other’s cultures.  Last week’s class was on food and drink, potentially useful to stop me getting a hangover by not understanding the language!

The one to one tuition with native speakers is something which is hard to get learning a language; I feel that my progress is significantly improved by this.  I remember learning Irish (Gaelige), this was not a luxury I had.

Why did I start to learn Japanese? 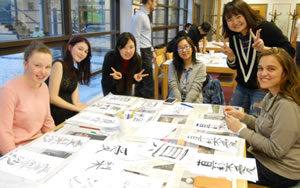 I want a job involving technology and the Japanese economy is one of the most powerful in the world.  During the classes, I learned that the Japanese have the same problem as the British with not speaking foreign languages.  I believe learning Japanese will be useful for my future career, even if it is just something to have on my CV.

There is also the cultural aspect.  A lot of people are just fascinated with Japanese culture such as anime and manga, as well as martial arts. I can’t say this really applies to me, I like the more traditional aspects of the culture. 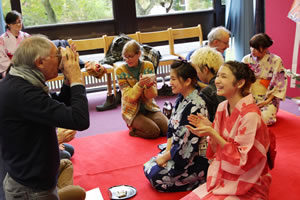 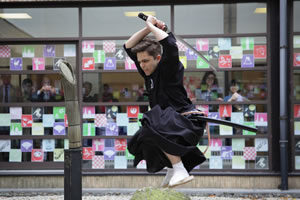 One day a year, the teaching centre is open to the public so that local residents and students can experience many fascinating aspects of Japanese culture,  from chopsticks and calligraphy to traditional folk dance, music and martial arts.  In the days leading up to the festival, activities are prepared and the teaching centre is transformed with themed decorations by student-led teams.

On the day of the festival, guests can take part in a traditional Japanese tea ceremony, eat Yakisoba, listen to musicians and bands, learn some basic Japanese, wear a Yukata, and much more!  The Teikyo Festival also welcomes local organisations such as the Durham Aikido and Shodai Ryu clubs, who demonstrate Japanese martial arts to visitors.

The Teikyo Festival is an enjoyable experience for everyone involved and, for Teikyo students, a wonderful opportunity to talk to many people about life in Japan.

The next Teikyo Festival will be held on 21st October 2017 and entry is free.  See you then!