For me, one of the biggest expectations about coming to University was the prospect of living away from home and cooking for myself. In fact, in many ways, cooking was something I was really looking forward to. So, after deciding to come to Durham, I was quite apprehensive about the idea of being catered for. Suddenly I became flooded with all these worries of how being catered for would affect my University experience. Will this mean I don’t socialise as much with my flatmates? Won’t having set meal times restrict me? Doesn’t this just sound like boarding school?

But thankfully, within my first week at Durham, my fears were all vanquished as I realised that I’d been thinking completely irrationally and being catered for is actually pretty great!

First of all I want to reiterate that being catered for feels NOTHING like having school dinners. I have found that there has always been plenty of choice, with at least four different mains (including vegetarian options), as well as sandwiches, soup and a salad bar during the day. Saturday brunch is also a highlight of the week for me – the perfect start to the day after a lie in!

My concern about being catered for making it harder to create bonds within corridors has also been proven so wrong over the last few months. Every mealtime is such a sociable occasion, and during Induction week it was a great way to meet as many people as possible from across college. If anything, having meals all together prevents you from only sticking with your corridor friends and not branching out to meet other people. Again this really adds to the college community feel, and I’m still sitting and socialising with different people every day.

I have also found the college catering staff to be considerate and flexible on occasions when I’ve not been able to make a meal slot. Whether because of overlapping lectures during the day or societies in the evening, the option to have a packed lunch or to reserve a late dinner ensures that meal times aren’t restrictive.  Another perk of the catering system are the formals which are put on several times a term (although this varies from college to college). Formals are optional but always a lot of fun and become even more sociable than normal mealtimes. 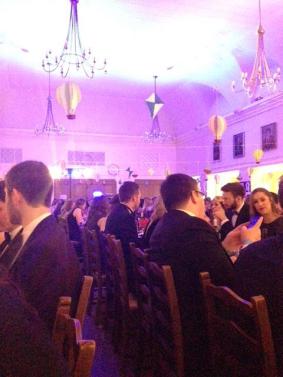 I find that with so much always going on both academically and socially at Durham, the feeling of not having to worry about shopping or cooking is a real relief. And with the choice to live out of college in second and third year, being catered for in the first year really means you get to experience all sides of student life.

After initially being one of my biggest worries when coming to Durham, being catered for, with its sociable and convenient advantages, has actually come to be one of my favourite parts of University life.