How I got to work at the UN 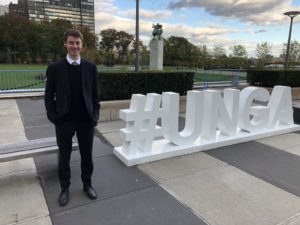 I have admired the United Nations for a long time. When I was at school I became involved in Model United Nations, an international initiative consisting of debating global issues at events around the world. I attended many conferences over a seven-year period, and with them, my fascination grew for the international and inspiring work carried about by the UN. This is an organisation that works for important causes that I deeply care about, and manages to facilitate real change in ways that no other body can do.

In addition to researching my thesis, my PhD programme at Durham has already offered me a lot of opportunities, from an accredited mini-MBA course to working with a medical imaging company in developing an automated method for identifying bones in X-Rays. Additionally, I am given six months of leave to apply skills gained through my PhD to an area outside of particle physics, my field of research. Data science methods, which form a core part of my PhD, are now being employed by institutions and businesses in almost every sector, and I was particularly keen to find an organisation with a humanitarian purpose to work for. Indeed, I knew that the UN was doing work in this field, and was growing in its requirements for data scientists.

After searching through articles about the UN’s use of data science I came across an interview with a previous employee of UN Global Pulse, an innovation initiative of the UN Secretary-General designed to harness emerging technologies for sustainable development, and a group I’d followed for a while. I found an email address for him and sent him a long email explaining why I was randomly contacting him about how I wanted to work for an organisation like the UN, what skills I had, and how this fitted into my PhD. I never expected an email back, however, a few days later he offered to have a Skype call. We chatted for quite a while and, although he said he no longer worked at the UN and was now based at MIT, he gave me lots of advice about how to apply for such a position.

I had been following his advice, looking into his recommendations, after a couple of months I got another email from him telling me that Global Pulse had an opening for an Artificial Intelligence Research Fellow in their New York office, a new position which they had never hired before. After going through the application process I was astonished to receive an email offering me the position, and I started preparing for New York. 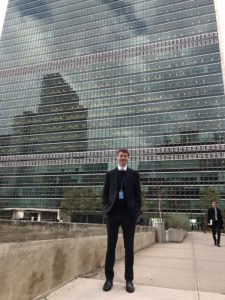 I have been in New York for four months now and so far been involved in a variety of projects including: monitoring the use of gender-based language within the UN; helping to build a social media analysis tool; and participating conversations around the ethical use of AI.

One project I became involved with early on is in collaboration with UNOSAT, who specialise in satellite image analysis.  One of the major tasks UNOSAT perform is to monitor change in refugee camps, such as growth or the presence of more administrative buildings, at the request of agencies on the ground, such as UNHCR (the Office of the UN High Commissioner for Refugees). The first step is to count the number of structures in the camp based on satellite images. Currently, the analysis is performed manually and can take several days for a single camp, depending on its complexity. I have been continuing the work of Global Pulse to automate this process by developing AI models that count the number of structures in a camp, classify them into predetermined categories, and provide a roof area map showing the variation in structure sizes and the land covered. The hope is that these algorithms can be used by UNOSAT analysts to significantly reduce the time taken to analyse a camp, and enable teams on the ground to more efficiently provide those in need with the necessary resources and care.

I have had an amazing experience here so far; the research being conducted by UN Global Pulse is of vital importance, and it is a truly fantastic organisation to work for. My work is generously supported by the UN and Durham University, through the STFC funded Centre for Doctoral Training in Data Intensive Science, to whom I am very grateful.

I’m Joe, I’ve just finished my PhD at the Institute for Particle Physics Phenomenology (IPPP) in the Department of Physics at Durham. I’m part of the Centre for Doctoral Training in Data-Intensive Science and my research has focussed on using machine learning in particle physics, as well as in the humanitarian space.
Share:
Share: