Get in the swing – try swing dancing!

When I was approached by a vintage-clad stranger in my hometown a couple of years ago, I only had a vague idea of what swing dancing might be. Due to my love of the 1940s (and the effect that had on my wardrobe) people had mentioned swing dance to me a couple of times before, but it was only after finding myself near-obsessively watching lindy hop (a type of swing dance) videos on Youtube that I thought it might be time for me to give it a try.

What is Swing dance? 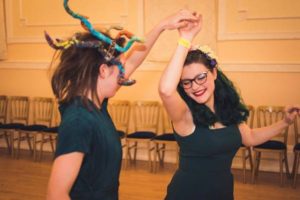 Swing dance encompasses many different dances dating from the 1920s to the 1950s, most of which originated from African-American communities. The original dancers from this era (known as old-timers) were athletic, musical, and energetic; dancing to insanely fast music and throwing each other through the air. As a self-confessed clumsy, non-dancer, it was with some trepidation that I entered my first lesson at Durham University Swing Society (DUSS). But when I saw how the old-fashioned jazz music I loved inspired a whole room of people to whirl and bounce around the room, I couldn’t help being hooked in.

Although many swing dances are partner dances, there is no need to come with anybody else, as most swing lessons are taught in rotation, meaning you end up dancing with nearly everybody- this was something I dreaded at first but is now one of my favourite aspects of lessons. The dances we learn in DUSS are social dances, this means there is no learned routine or set partners; when a new song starts to play, you ask someone to dance and then improvise your way through songs, fitting silly and impressive moves to the music. 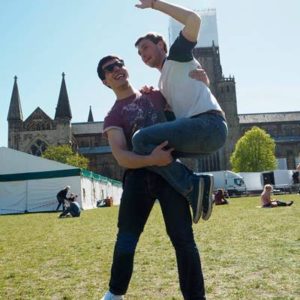 Swing dance is in the midst of a massive revival in the UK. There are classes up and down the country and entire weekend festivals dedicated to lessons, social dancing, and meeting new people. Although you wouldn’t necessarily spot it from the outside, swing dancers are jazz party animals. I have often found myself in a completely new city, dancing to jazz bands and talking about Count Basie at 3am. Paired with the vintage fashion sense of dancers, it often feels like I’ve been time-warped back to low-lit 1920s speakeasy. My friends from DUSS and I have travelled to far-flung places to meet fellow dancers and attend swing dance weekends; between my close friends and I, we have made it to Sweden, Italy, Scotland, and Poland (as well as flitting up and down to London, Brighton, Leeds, and York every year). The world-wide swing community is wonderful to be a part of, and has left me finding best friends in cities across the UK, and quickly making connections with new people ready to dance with you or just chat about the swing phenomenon.  Take a look at our video, celebrating swing dance across the world!

Watch a clip of DUSS in action –  https://www.youtube.com/watch?v=qoKLZkoD2k4,

Join in the fun!

Back in Durham, I am loving being part of the older swing crowd and seeing new people inspired by the talent of famous dancers and syncopated beats of big band tunes. I would recommend that even those among you with two left feet at least dip your toe in the swing dance waters; I have found self-confidence, forged friendships, and become slightly obsessed- and I’m not looking back.

Durham University Swing Society run lessons on Sunday nights in the Fonteyn Ballroom in the DSU 7-8pm(Beginners) and 8:30-9:30pm (Intermediates). There is also a recap of Sunday’s lesson and social dancing in the Vane Tempest Hall in the DSU Wednesdays 7-10pm. All lessons are open to both students and the general public, with membership for a whole year costing £15 (all lessons included).

Find out more about Swing Dance at Durham at the DUSS Facebook page.