Eddie the Eagle flies in to John Snow College 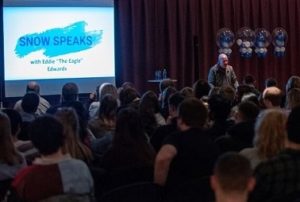 John Snow College welfare team ran our week long, mental health awareness campaign called ‘Snow Speaks’. This campaign took a very personal angle as members of our college shared their own mental health journeys through videos on Facebook. Some topics discussed included depression, anxiety and stress, as well as strategies students employ to overcome these issues. It became apparent that our college community students are extremely resilient when faced with adversity and we wanted to provide a source of motivation and encouragement to both students and staff at Durham University. Snow College had spoken out and now we thought it was someone else’s turn. 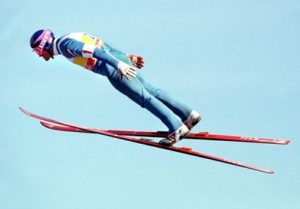 I knew the name Eddie ‘the Eagle’ Edwards, I had watched the film about his ski-jumping exploits at the Winter Olympics in 1988 but hadn’t thought much beyond the character I had seen portrayed alongside Hollywood star, Hugh Jackman. We contacted Eddie and asked him to come along to give a talk on how he had stayed motivated to pursue his death-defying sport.

We were delighted to see so many faces from our College at this event and were also lucky enough to welcome new faces to John Snow which included students from other colleges, staff and members of the general public. Once everyone had taken their seats and Eddie was introduced, we were all eager to hear his story. Eddie began by describing his love of skiing and told us that he was actually a competitive skier before he got into ski jumping. On his journey to the Winter Olympics, he had to overcome a multitude of obstacles, such as his late start to the sport, a lack of funding and the consistent belittling of onlookers and even criticism from the sports governing body. 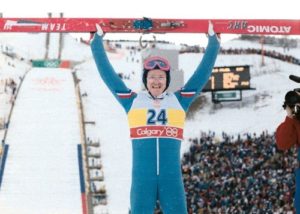 Eddie explained how he had struggled to fund his sporting career, equipment, training and travelling to competitions, but never gave up. We learned that while he trained independently, he was invited to train with a number of his competitors from other countries who coached him and offered encouragement and advice on his jumping.

While the biographical details were truly interesting, Eddie’s underlying message of positivity and resilience spoke loudest to me. Even when he struggled to find somewhere to sleep and have food to eat on his journey to the Olympics, Eddie always pictured where he wanted to be which motivated him to get there. Eddie reinforced his mindset of taking the positives from every situation he was in, which fuelled his desire to achieve his dream of competing in the Winter Olympics of 1988. It was also a relief to hear he (technically) did not finish in last place as a competitor did not make it to the competition as they got injured during training on the previous day! 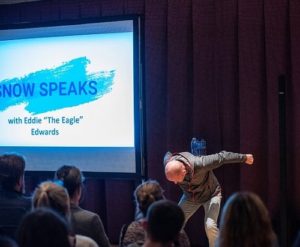 I would like to thank all of the staff and students who came to this event and showed their support as well as all of the people who helped make it a success. I hope that those who attended left with some motivation to persevere and overcome whatever obstacle they may face. As Eddie said:
“If you think you can do it, ignore what anybody else says and go for it.”