Innovation inspires. It inspires people to think differently, to challenge the status quo and to join as part of a mission to change the world for the better. When I joined Durham University Electric Motorsport (DUEM) 2 years ago, this was certainly the case. The team was in the process of designing and engineering their latest solar car, DUSC2015.

Little did I know the journey that we as a team were about to embark on!

To give you some background, DUEM was formed back in 2002 when Dr. Sims-Williams and a group of students in the University engineering department came together to design, build and ultimately race a solar powered car. To many this seemed like a crazy idea – the irony of building a solar car in Durham, famous for its ‘changeable’ weather, was not lost on anyone. Nonetheless the team persevered and in 2004 completed their first solar car, taking it to race in America in 2008. The team completed the 2500 mile North American Solar Challenge and were awarded Best Rookie Team before then upgrading the car and taking it to Australia in 2011 for the World Solar Challenge, qualifying 3rd in the world in the process.

We fast forward to 2014 when, as mentioned, the team was hard at work on their brand new solar car. The combination of an innovative design, awesome technology created by the team and a dedication to racing this car in Australia proved irresistible and I was hooked. The car would be a brand new construction, using a carbon fibre monocoque to save weight, and use the latest iteration of our own motor design to power it to speeds of 70mph, all while using the equivalent power of a kettle.

Almost all the components were to be designed and manufactured by the team to produce a car that would be able to race entirely on solar power across Australia against 50 teams from around the world. Since joining the team, I have been part of some incredible challenges and momentous triumphs. The race in Australia was a huge learning experience for the team, with short circuits in the motor hindering progress but galvanising the team to push for an even more efficient design for future races. 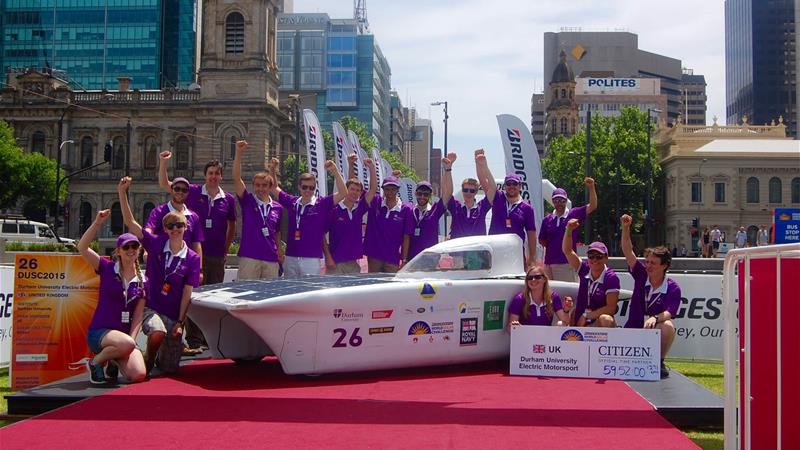 We did it! Completing the 2015 World Solar Challenge.

Following the 2015 race, the business team has completely rebranded the project around new values, signed more than a dozen new sponsors and attended world class events. These include the London Motor Show, Goodwood’s Festival of Speed, exhibiting at the Science Museum and attending both the Formula E-Prix and UN Climate Summit in Marrakech. No other solar car team in the world can boast this variety and marketing reach, despite budgets far greater than ours. 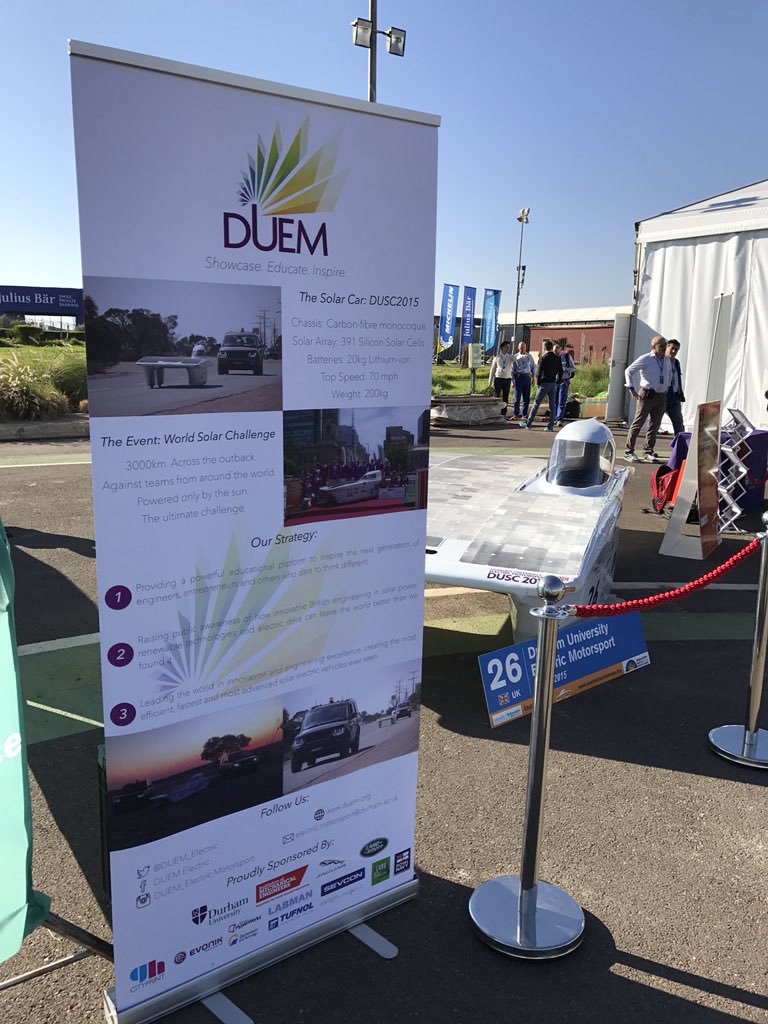 Showcasing DUEM on a world stage! We exhibited the car in Marrakesh at the Formula E-Prix.

This year we celebrate our 15th anniversary and are gearing up to race once again in the World Solar Challenge in October. We have an extensive testing program coming up, more world class events to exhibit at and far more besides. This is far more than just a celebration of 15 years of being at the top of our game. It is the start of something truly revolutionary.

I, personally, want to thank every single team member of the Business Team over the last 2 years for their dedication and hard work and also for all the engineers on the project who continue to push the boundaries. As an economist, I am honoured to work with such great people across all teams who all share the common drive to do something different.

As our world continues to face environmental challenges, one has to look to all corners of technology to find innovative solutions. We believe solar powered cars have a big part to play in forthcoming revolutions in the automotive space. They will change the way we think about the cars of tomorrow. We are going to be spearheading this revolution.

We are just getting started and have very exciting plans for the future. We have come a long way in 15 years but have a long way to go. We aim to continue inspiring the generations of tomorrow to think differently about our world and to showcase the potential of sustainable innovation and technology.

We are going to change everything; all over again.

Please take a few minutes to watch our film DUEM: 15 years in 15 seconds

DUEM would be delighted to connect with companies interested in partnerships for their forthcoming events and races and also with alumni and any other people interested in finding out more about them. You can connect with the team via social media: