Taking part in this event as part of the recent DUCK Week, meant my friends and I travelled through Durham with a double duvet, two roll mats, four sleeping bags, seven pillows, and three blankets between us. Travelling light isn’t really our thing. No, we weren’t headed to the Billy B (summative season is bad – but it’s not reached that extreme… yet) we were bound for the beautiful, historic, and mesmerising building that is – Durham Cathedral. The premise: In aid of FoodCycle Durham and MovingOn Durham, the DUCK committee had essentially organised a mass sleepover in Durham Cathedral. We all arrived at 8pm and set up camp for the evening, and were then treated to a range of performances!

DU African drumming society played for us as we entered, followed by Tone Deaf Theatre Company who did two numbers from ‘Songs for a New World’. Both were fantastic, and great entertainment.

We then had two excellent performances from the DU dance competition team, and then one from INSTEP, as well as a musical theatre dance class – which was SO much fun! The finale was a flawless performance from Northern Lights – Durham’s superb a cappella group!

Alongside all of this entertainment FoodCycle had provided us with an incredible spread of food: sandwiches, biscuits, crisps, chocolate, hot drinks… it was fantastic! It was even more fantastic when we were told that all of the food we had been given, was intended to be thrown away – as it had gone out of date that day. The amount of food was simply astounding, and it was all incredibly tasty! 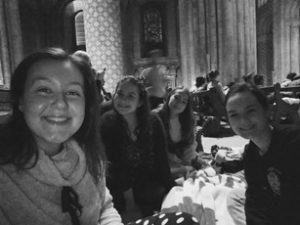 As the last performers finished, the DUCK organisers screened a film for us all to watch – Crazy Stupid Love (excellent choice I must say) and the evening drew to a close. At about 1am the movie finished, and we all settled down for a slightly uncomfortable (but surprisingly warm!) night’s sleep.

It was completely surreal watching a movie in the 11th century Cathedral, in pyjamas, whilst considering you had made some money for charity whilst doing so. We were woken just after 6am and we left the Cathedral just before 6.30, wandering home in our pyjamas through the streets of Durham.

The total amount raised for these two local charities is estimated to be around £7,000 which is an incredibly impressive sum. A huge thank you to the DUCK committee, stewards, Durham Cathedral, and everyone who was involved in this completely unique event. It’s certainly an evening I won’t forget anytime soon.

Hello! I'm Jess! from Josephine Butler College, I've just graduated with a History degree. I loved my degree because it was so wide-ranging, my modules varied from Japanese political culture - to a study of Robin Hood! I got really involved in college life, I was the elected Services Officer and I 'frepped' (fresher rep) during freshers week! I love Durham (not just for its many coffee shops!) and choosing to study here was most definitely been the right decision.