[Or: Fantastic Beasts and Where to Find Em]

The beauty of Durham is that, as unassuming as its pastoral beauty may make it appear, it could never be accused of being predictable. Call it what you will – initiative, invention, or simple quirkiness – the ingenuity and originality expressed by the University community has continually surprised me.

And certainly, no less could be said of the academic research. Don’t believe me? Meet… 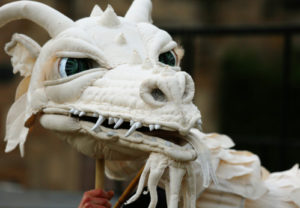 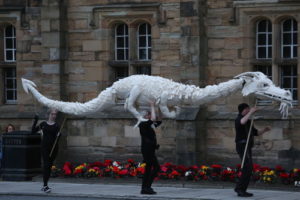 This beautiful – okay, I’ll concede to bonkers – creation is based upon the local legend of the Lambton Worm.

Here’s where you’d find Lambton – just a little way out from central Durham! 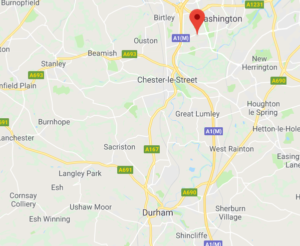 I’ll admit, “worm” may make it sound more likely to be a guest star on Countryfile than to cameo on Game of Thrones, but names are deceptive. The Lambton Worm swallowed an “entire nation”, he’ll have you know, and clearly made enough of mark on people for his legend to live on to this day. Indeed, his memory is more than just a dim flicker – he even has his own song. (Every so often, if you’re very lucky, you’ll find that a rare sighting of the dragon is scheduled in Palace Green…complete with live performances by English department lecturers.)

So, with such a rich local history, I determined that you may be able to take the dragon out of Durham, but you can’t take Durham out of the dragon. Nevertheless, he is – quite understandably – of interest to more than just the immediate local area. During my role as an intern within REED (or Reading Early English Drama, for the uninitiated), within the Institute of Medieval and Early Modern Studies, I was informed of just how important academic outreach and community impact are; after all, what use is research if it is confined within the University walls? (I cannot resist inserting an apt metaphor: what good is a dragon confined to a cave?)

Wrangling dragons may itself be an ordeal, but it soon transpired that transporting them is just as much hassle. The dragon being (with the utmost respect and deference) separated into its somewhat-manoeuvrable constituent parts, it was then a case of moving it from Elvet Riverside. Attracting no small amount of intrigued looks from lecturers and cleaners – and after thorough interrogation by the security guard – the dragon gloriously descended down from its roost in ER1 to its temporary home. Gloriously, indeed, but slowly…in multiple parts, requiring many trips.

But that was but the smallest part of its intended journey. The next leg presented a much more perplexing problem: how to transport the dragon whole, to York.

And so, the typical student solution was employed: call a taxi.

Notwithstanding the slightly fazed taxi driver – who, at being told we required a minibus, probably presumed he’d be transporting schoolchildren rather than supernatural beasts – the journey went smoothly. (I particularly enjoyed the looks on the faces of people who chanced to glance in the taxi windows as we cruised down the A1.)

Finally, we arrived at the York Festival of Ideas. It’s always an energetic and eclectic environment, with attendees and presenters from all walks of life, and all manner of interests. Our aim was to attract them all.

And so, having smuggled in the dragon and harnessed up its manipulators (it requires no less than four people to manoeuvre), it was time to make our grand entrance… 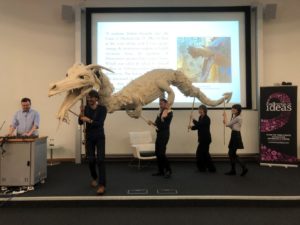 …interrupting our colleague’s talk. Accidental or no, I’ll let you decide, but we certainly made an impact. After the initial shock (imagine a hundred deer caught in headlights), all the children in the audience had one of two responses: fight or flight. However, both reactions soon gave way to curiosity (and even cuddles), when they were all invited to come onto the stage and meet the Durham Dragon.

Suddenly, the interest of children and adults alike in our colleague’s talk – conveniently, on mystical creatures of the North – was amplified massively. Questions upon questions abounded, and answers were no less forthcoming. Academic research, rather than conjuring up images of silent libraries and dusty tomes, came alive in that moment: it had origin, purpose, and impact.

I suppose that is the essence of what I have learned so far during Collingwood College’s incredibly generous provision of a summer internship opportunity: that Durham’s academic community is more than an insular bubble. As obscure as research may first appear, it has relevance and pertinence to the “real world”, to the everyday. The never-ending invites we, as students, receive to talks, conferences, and debates, make sense to me now – because what epitomises Durham is engagement.

Accounts of this curious creature feed into a folk tradition of foul serpents, worms, and dragons active in the county since before the time of the Norman Conquest.  To read more about the legend of the Lambton Worm visit READ (Research English at Durham) blog site.

Hi I’m Emily, as befits a recent English graduate, I was Collingwood College’s student Librarian when I was in Durham (I hope to return soon to study more). You’ll usually find me, for either work or play, buried in archives researching the obscure, the niche, and the forgotten…and sometimes wrangling dragons.