It was a lovely Thursday evening in Durham, but what made it extra special was the Lumiere event – one of the UK’s largest light festivals all around the city centre – the perfect excuse to take a break from your studies. This is in Durham until 19 November, so don’t miss out as I highly recommend you come (and bring a warm coat!). Back in Durham for the fifth time, artists from around the world illuminate up the city in delightful and unexpected ways, with a series of 28 light installations to explore around the city. 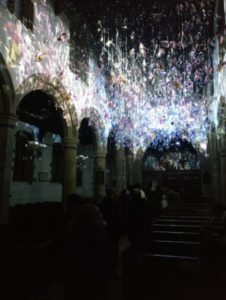 Having been to the last event in Durham two years ago I had high hopes, it was such a spectacular and beautiful event, so I knew I was going to come once again. Durham’s historic Cathedral is always my highlight and it didn’t disappoint this year. The Cathedral was lit up with the lights changing in an alternating clockwork patterns to the ringing of the live bell ringers. Not only am I amazed by the bell ringer’s ability to ring with each movement of the lights to the outside AND inside of the Cathedral, but the crowd of people who came down to Palace Green to watch the mesmerising sights. The crowd is escorted from Palace Green into the Cathedral where the lights continue. The Cathedral is beautiful already but it is made extra special with the lights – it really does feel magical.  As you walk through the Cathedral there are beautiful artworks, lights and little things to get involved with, creating such a great sense of community. There is even live footage on screens of the bell ringers, so you can see them in action (I couldn’t help feeling they must get pretty tired doing that for hours!) 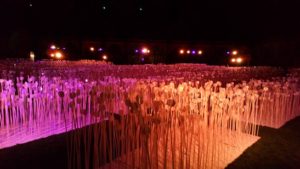 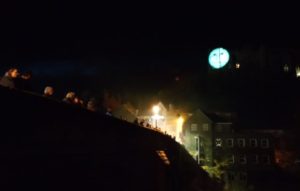 As you walk out the Cathedral you follow the scenic route around the World Heritage Site passing each new and amazing light installation. At the Cathedral cloisters, the installation featured thousands of illuminated flowers resembling a field of shimmering wheat with the change of colour – simply genius. Prebends Bridge was also gorgeous with a simple but effective white light line across the river – and as one man said; ‘It’s got more lights than our Christmas tree’.  As you continue your journey with the crowd, you come across another one of my favourite parts of Lumiere, the walk along the River Wear with the bank entirely lit up.  It was dazzling – the photos don’t do it justice. Not only were there lights but also the noise of different frequencies which gave it almost an eerie feel.  As you walk along the river bank and end up at Framwellgate Bridge, the Castle is lit up by one gigantic moon with a face on it that moves about (apparently a real face), which makes it look so real. It was very cool. 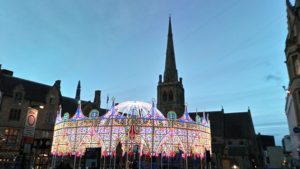 The Market Place was also stunning – giving an early festive feel to the City, with the bright domes and arches which were massive and almost felt like a fairy tale with thousands of LED lights that create a winter wonderland. Plus, the street food vendors selling their delightfully smelling food helped add to the atmosphere and make you very hungry.

There’s always a favourite talking point at Lumiere, but judging by this year, there is definitely more than one. I won’t reveal all in order to leave some element of surprise, but I guarantee you will love it. The only bad thing I can say about it is that it doesn’t happen every year. So, do come along and let yourself get caught up in the wonder.

For more information on Lumiere and the University’s involvement see our webpages.