The Easter season is upon us; and unfortunately, to much of the student population (in particular the arts and humanities students), this means that “summative season” has started. For those of you lucky enough to be blissfully unaware of what summatives are, they are essentially coursework: work usually in the form of essays that count towards your final degree mark (or the end of the year mark for you lucky freshers). Most of us have several deadlines that all seem to coincide with the same few days at the end of the Easter holidays.  Sounds awful, right?  Not necessarily. 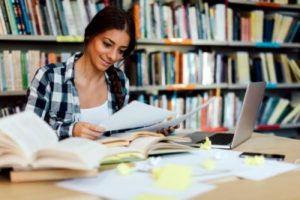 Ok, days spent in the library hiding behind a self-made (and increasingly precarious) tower of books doesn’t sounds like most people’s cup of tea but, during a brief moment of procrastination one rainy April morning, I discovered that there are actually a few pros to this frankly rather manic month

It’s Easter. It may sound like stating the obvious, but during this period the supermarkets are choc-a-block (see what I did there) with cheap, seasonal chocolate. Tesco were selling boxes of crème eggs for £1.50 last week, so naturally I bought several and treated myself to an egg every time I finished a paragraph. My friends weren’t necessarily impressed but it made it all worthwhile.

Get out and about

It makes you exercise. With all this chocolate being consumed by the minute, exercise becomes a priority. And with all these deadlines, going to the gym feels like a waste of precious time. So instead of being cooped up in your room, a brisk walk to the library or a leisurely stroll home, actually becomes a welcome part of your daily routine, as well as a much needed break outdoors.

It creates great small talk. Is there someone in college that you’ve always wanted to have a chat with but never had much in common? Found yourself next to someone new in the lunch queue? Summatives inevitably unite every student in solidarity as they try and race their deadlines. As well as the bonding that mutual sympathy provides, conversation is a proven stress reliever! What more could you want?

It will eventually end. Deadlines are inevitable, which may sound scary at the time but it does mean that they also have to pass. The long-awaited day when you can leave the library forever (at least until you start revision anyway) will come. My housemates and I celebrated by cooking an obscenely huge dinner for ourselves and then going to bed early. It really is the dream.