Flash back to roughly 2 years ago, I joined the Durham University’s Concert Band incredibly nervous and still adjusting to life at Durham. Entering Palace Green for the taster rehearsal with my flute, I knew that my musical ability suffered from a lack of confidence and consistency, not helped by my lack of ensemble-playing experience. Furthermore, upper woodwinds are never a rarity, so while I expected my peers to all perform impeccably, I wasn’t as confident in my own ability. However, that didn’t stop me wanting to join a university-wide music ensemble.

My first year in Concert Band went by in a melodious blur: sensational concerts filled with fantastic repertoire every term, the sound of a full and passionate wind band in every weekly rehearsal, and a particularly memorable celebration for the band’s 50th anniversary. I made a variety of friends that year, some exec and some not; one in particular joined the ensemble at the same time as me (and just as nervous!) and has joined me on the exec for the last two years, taking the band to new heights and becoming a great friend in Durham. These connections, exhilarations and ambitions all contributed to my decision to run for an executive committee position for my second year, and again in my final year. 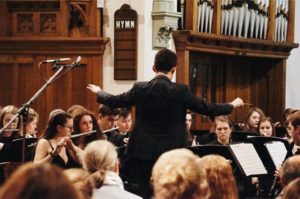 Life on the executive committee adds a new dimension to DUCB; suddenly you realise a) time, b) members and c) money are all crucially finite resources for a student ensemble, and these must be managed by this diverse but small group of students you’ve suddenly become part of. Different degrees and commitments vary levels of input, yet everyone soon settles into their roles, overlapping perfectly into the ‘grey areas’, producing an efficient and tightly knit team.

Being the DUCB Publicity Officer and Social Secretary have both been very rewarding roles, for the whole band, (selling out our Broadway themed Michaelmas concert twice in my publicity premiere) and in personal ways also. Simply seeing the gradual settling in of new freshers in the same situation as myself two years prior, and their talents, confidence, and enjoyment of Concert Band increasing each week, is enough to make any exec role worthwhile. 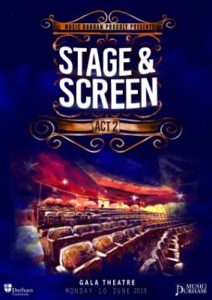 We’ve got big plans coming up for the rest of term; after a triumphant return from the regionals of the National Concert Band Festival with a gold award, we’ve competed at the Nationals in the RNCM during the Easter holidays. We have another exciting event planned for our Easter term performance (so keep a look out!), alongside Music Durham’s Gala Theatre Concert on 10th June. We’re also planning more concerts, opportunities and even a joint tour with DU Brass Band for 2020, so now is the time to get involved!

Summer in the City

Our Gala concert is just one event that makes up this year’s Summer in the City Festival. We are looking forward to an entire month of music, theatre and art exhibitions and events across the city. There’s so much going on, it’s a really busy time of year for all student musicians!

University is so much more than a degree, and my time with DUCB has been a rollercoaster of enchanting music, irreplaceable memories and the establishment of lifetime friends. It’s really no wonder I’m coming back for a fourth year!

Read other blogs to find out more about the wide variety of student music at Durham from Brass to Gospel.

Check the Music Durham webpages for details of all student music performances planned this term.