Before joining Durham, I knew that I had to join a concert band, and I did just that! I didn’t however anticipate the dynamic of the band. The fact that the society was entirely student led blew me away, as did the history of the band’s conception.

I joined DUCB as a percussionist and I was elected as the publicist just under a year ago. The bands ethos cemented my enthusiasm, they stated that their ultimate aim was “to create a relaxed and informal atmosphere where everyone feels welcome,” whilst “playing music to an excellent standard”. That ethos truly defines DUCB, our conductors always seek to choose music that is both accessible and musically challenging, and the band’s repertoire is vast and varied. 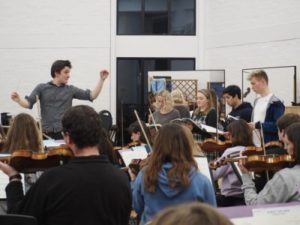 We rehearse weekly on Sunday afternoons and usually perform at least three concerts per year. We performed twice during the Michaelmas term, including having the privilege of performing alongside Durham University Brass Band who recently won the Shield event at UniBrass and the Band of the Royal Armoured Corps who also led a workshop for us.

This year Durham University Concert Band (DUCB) celebrates its 40th Anniversary, and to commemorate the event we are hosting an ‘Anniversary Celebration Concert’ in Durham’s Town Hall on 8 March. The pieces that we are performing include Percy Grainger’s masterpiece ‘Lincolshire Posy’, Howard Shore’s ‘Lord of the Rings’, Morten Lauridsen’s ‘O Magnum Mysterium and many more.

One Student started all of this. Peter. 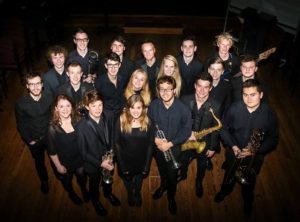 I have attempted to get in touch with former members of DUCB to learn more about the band and get a greater sense of it’s history. Regrettably I have been unable to find the man that started it all. At the start of Peter’s second year, he got in touch with one of his neighbours in Hatfield College, a clarinettist called Steve the two of them then started a band. They began finding others by various means. Peter got some music from his old school and they sourced some money and bought a few marches. Very democratically, Peter became conductor and Steve 1st clarinet!  They did not hold auditions and we have followed that trend the band also practised in the rooms opposite the Library on Palace Green just as we do now! Steve and Peter discussed a name for their band. The group initially resembled that of a military band but Durham University Military Band (DUMB) for some reason didn’t gel… So they settled for Concert Band instead. Concert Bands first performance was on Palace Green In June 1978.

In the 40 years since then, DUCB and other Music Durham ensembles continue to go from strength to strength, Epiphany term alone has already seen Music Durham put on a plethora of fantastic performances Tri-Uni, Chamber Choir’s Chapter house concert and more. I can assure you that Concert Band will follow them in good stead!

We can only hope that you will join us to commemorate the big four’o, and kick of the next decade in style. Take a break from assignments and come and see the amazing work that your peers have produced.