Anyone who has found themselves in a lecture theatre of late will have noticed a new gadget on the scene: the Encore Indicator Light. Boasting a trio of coloured lights and a button almost asking to be pressed, it acts as the front line and control system for lecture recordings throughout the University. We would like to give you an insight into the project of designing and building these lights.

Once the decision to record lectures at Durham had been made, a suitable control system was required. Current market offerings were limited in both features and usability, and so it was proposed that custom hardware was to be produced. 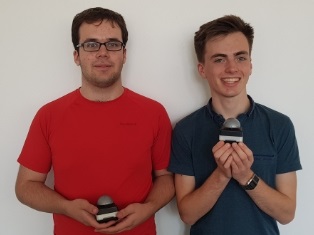 Since it was a project that was designed to aid students in their lectures, it seemed fitting to ask students to work on the project as a summer placement. As it happened, we were the lucky pair of students that got the job. As second-year engineers, we had the opportunity to give something back to the University while developing our professional skills. After a few meetings to set things up, we were able to get stuck in with the project.

The first hurdle to clear was choosing a design; we needed a robust design that could be implemented quickly and without breaking the bank.  Several intense whiteboarding sessions later, our first design came to fruition.

We then spent a couple of weeks developing the design.  Sketches became computer models, computer models became 3D prints, and 3D prints were refined and assembled into early prototype units. Since we were using a mixture of commercial and custom parts, one of the biggest challenges was bringing the parts together into one fully functioning unit. However, it wasn’t long before we could feel the warm glow of our prototype unit lighting up our desk space, and we could submit our designs for manufacture.

A few weeks of writing (and rewriting) software slipped by before assembly of the units began. Our desks slowly began to disappear under stacks of parts and completed units, until we were finally able to complete the last one, at which point we could install them into rooms. Our summer ended with the last of the rooms tested, and our fingers thoroughly crossed for the start of the new term.

Looking back over the project, we can safely say that it has been a fun experience and valuable to both ourselves and the University. That being said, I think it’ll be a little while before either of us takes half an eye off the lights during lectures in upcoming years!

We would like to thank everyone in CIS and the Department of Engineering for providing us with this opportunity. We hope that more students can be involved in projects like this in the future.