When I arrived in Durham back in 2016, I was unsure what to expect: who I would interact with, the doors that would be open to me, or how I would be spending my time. As I wandered around the Fresher’s fair, bombarded with Domino’s vouchers (which were gratefully received) and signing up to every society under the sun, Student Community Action (SCA) really caught my eye.

I’ve always been involved in volunteering, both overseas and in the UK, so coming to Durham, I knew this was something I wanted to continue. I natter for England, I love people and as a sociologist (and human being), I am genuinely interested in the lives of others. As soon as I saw the Generations Together Project, I knew this was the one for me. With maximum 12 contact hours a week, I thought this would be a positive and enjoyable way of spending my free time, making an impact in the process. 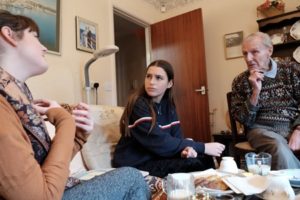 Walking up to Stan’s house for the first time, I went in with a completely open mind (code for: I had no idea what I was going to be faced with). The welcome I received was beyond anything I could have imagined: possibly the warmest, kindest gentleman I have ever met. I was matched up with a fresher, Sophie and we bonded with Stan straight away, the cuppa and continuous Bourbons definitely helped it along. We cleared Stan’s leaves from his path, polished his silver and heard his life story in the process. With 92 years and many a fascinating story to tell, the recommended 2 hours eventually led to 4 (no complaints from our side). Since then, we have visited Stan for 2 hours a week during term time and the time spent with him as been marvellous/precious/bonkers. 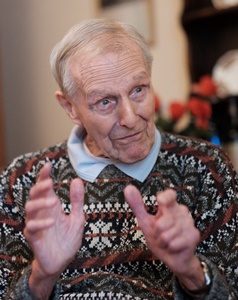 With a singular blog post, it’s difficult to sum up how truly fantastic Stan is.
We’ve heard all of his stories (they get even better the 20th time over), from living in Majorca to being considered a top dog working in Durham cathedral. He’s met incredible people and seen incredible sights; it has been a joy to have even an insight into his wonderful years. As cheesy as it sounds, it almost feels like an honour for us to be a part of his stories in the present: we’ve learned, we’ve listened and cor blimey, have we laughed! His knowledge and humour combined really make for wonderful weekly discussions. Stan’s wife is currently in a care home and so living on his own, he really looks forward to our visits (he writes it on his calendar every week, it’s the sweetest thing).

More than just a cuppa and a chat 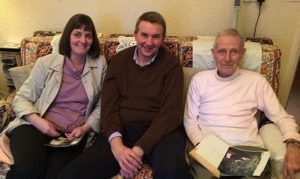 Even out of term time, we’re in frequent contact, whether through letters or texting, he’s never too far away. Stan has been an integral part of our university experience and as a result, has met the majority of our family members (right) who now receive regular letters from him also. He somehow has the ability to bond with anyone he interacts with (even if it’s a passing conversation): the lady who sells jam in Durham market, a Sainsbury’s employee, taxi drivers, even the dentist. Stan once asked me to escort him to the dentist, on our arrival, I asked ‘when is your appointment Stan?’, in which he replied ‘oh Emma, I have no appointment, I just feel bad that I haven’t seen the dentist in a while, thought we’d have a catch up’. I just smiled widely and decided not to question it. 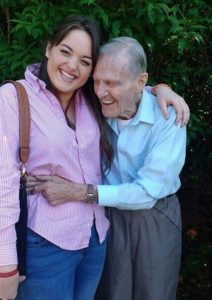 Sophie and I regularly run errands for Stan, picking up anything he needs (including 16 Easter cards, the occasional tipple and all kinds of technical gadgets). It’s become much more than a friendship of necessity or one aimed to alleviate loneliness but it’s a genuine bond (again, cringy). We’ve had graduation parties for his previous volunteers (pictured right), birthday parties (he always puts the fairy lights up) and have thoroughly enjoyed getting to know his family along the way.

The SCA Generations Together Project has been an absolute pleasure and a great opportunity to escape the student bubble once a week. Stan is a remarkable gentleman; we’re looking forward to many more cuppas and Wednesday afternoons spent with him.

Student Community Action (SCA) defines the Generations Together Project as ‘an elderly befriending project which aims to alleviate the loneliness and isolation sometimes felt by older people’. In 2017, the charity Contact the Elderly described loneliness among older people in the North East as a ‘desperate’ situation and nationally, isolation has been referred to as ‘a silent epidemic’. As a University and community as a whole, we have the opportunity to reach out to individuals who may be in need of a cuppa and chat or someone to simply share their time with. The Generations Together Project is the perfect way to achieve these aims.

Find out more about Generations Together and the range of over 80 SCA volunteering projects you can get involved with at Durham, or read more from our students.