Bowled over by South Africa

After waking up early to meet at 6 am, the South Africa cricket tour 2018 had begun. And for the first time the women’s team, the arguably better half of Durham University Cricket Club (DUCC), would be going too. We finally arrived in Cape Town over 24 hours later, after a quick and very scenic (or not) pitstop in Dubai Airport during the middle of the night. We immediately headed to the pool and enjoyed the afternoon sun before exploring the beautiful waterfront and enjoying a big group meal, and a few drinks of course. Tour had officially begun and we were more than ready, after leaving snowy Durham behind.

The cricket part of the tour kicked off with a 40 over game against Western Province’s women’s team; they were a strong team and this was similar to being thrown in the deep end, but we relished the challenge and high standard of cricket, facing five international players. We went on to play Western Province again in another 40 over game and in a T20, as well as playing Stellenbosch’s university side. We may not have had much success upon first glance at the score sheets but with a 50 from Sarah Martins, debut wickets from Jessie McDonnell, Meg Pittman, Lucy Bennett and Saoirse del Tufo, and dramatic improvements all round, we can count it as a success.

Alongside our match play, we squeezed in three training sessions during our time in South Africa, enjoying fielding practice outside for the first time in months accompanied by sun and, of course, frequent suntan lotion application and just a little bit of burning! In this time we perfected our pre-match stretching and warm up session, alongside targeted net practice, all while soaking up the South African sun.

On the tourist trail

As well as bonding as a team on the pitch, we also became closer during our couple of tourist activities. We spent a day at Groot Constantia vineyard, taking part in a tasting session, factory tour and exploring the grounds. We had tickets for the first day of the third test match between South Africa and Australia at Newlands; the infamous match in which Australia were caught ball tampering. We walked up Table Mountain in a speedy two and a half hours, sweating but enjoying the stunning views over the bay behind us; only to reach the very top as the clouds came down and to stand freezing in the queue for the cable car with nothing but white cloud surrounding us. On top of this, we enjoyed many delicious meals out and BBQs at the hotel, as well as eventful nights out and relaxing afternoons lounging round the pool. It was 10 days filled with the perfect balance of tourist experiences, relaxation and cricket. The whole squad really enjoyed the whole South African experience and are coming away more confident and ready for the season ahead. 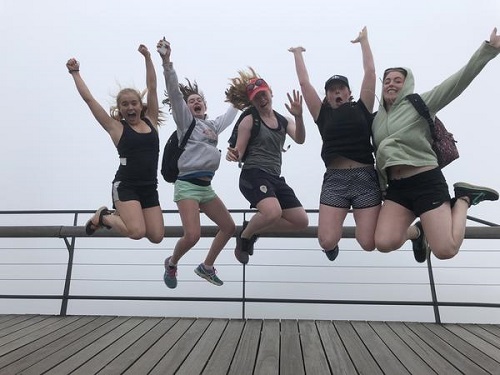