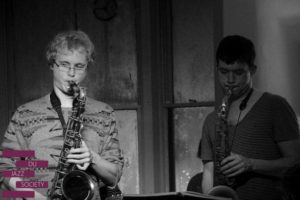 Every Sunday evening from 8, the Jazz lovers of Durham descend on Empty Shop, at the end of Framwellgate bridge (the building opposite Starbucks- you’ve have to ring the door bell but trust me it’s worth it! Ok, shameless plug over). Personally, becoming a member of the Jazz Soc Exec sort of happened by accident for me. Heading to the Undie at the beginning of last term to watch my friend perform (shout out Tom Rickard), I only intended to stay for about half an hour. However, he had brought his camera along and was trying to get some shots of the house band for the Facebook page (Durham University Jazz Society), so I agreed to help out and take a few pics while he was busy. It was during that evening that I realised that by doing this I could combine two things I loved -photography and music- while being entertained for free! Having continued to attend the Jazz Jams every Sunday, it became clear that they required a more frequent photographer for their events, to which the VP, Tom, responded by putting a camera in my hands and adding me to the Exec group chat with the position of “Publicist”, so that was that. I share the position with Ali Wilson, who covers the online side of things, while I take and upload the shots from the evenings, all being well it seems to be running smoothly so far!

As a group, it’s all very hands on, as, each Sunday we have to somehow get all the kit from the music block on Palace Green all the way down to Empty shop, which normally entails fitting an entire drum kit, a sound system, a guitar amp, a bass amp, a keyboard stand and several stools and music stands into Heather’s car, as well as the occasional trip to Grey College to retrieve the keyboard..! 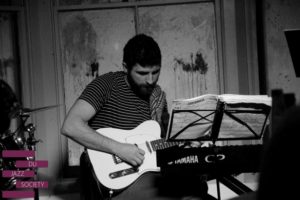 It’s been such a great experience getting involved in a society outside of college as it’s meant I’ve got to meet some fab people who I wouldn’t necessarily have got to know, as well as getting involved in a whole different scene of Uni life, presenting a completely different set of challenges and results. Also, as a singer, it’s exciting seeing other peoples style when performing this genre as well as at some point hopefully getting to perform with our super flair house band myself.

Back to shameless promo, with the addition of a new position to the exec (introducing: Kevin Muendo- Logistics #isitreallyaposition?), we are currently working on liaising with local venues around Durham to help us host a 3 day long Jazz Festival after exams next term (Provisional dates being the 2nd-4th June). This will be a really chill event across the whole of Durham, ticketed at around £5 for the whole Festival. It will feature artists from both the University and across the North East in a bid to both showcase the extraordinary talent that is present here as well as increasing general interest in Jazz as a genre (because it’s great and everyone should love it!)

Signing off now, if anyone is interested in performing with our house band or just coming and having a chill night listening to some quality jazz, have a look on the DU Jazz Soc page on Facebook for more deets.