What To Expect From Lumiere

Not sure what the Lumiere Festival is? Well you’re going to be hearing and seeing LOTS of it for the next few weeks so here’s the low down:

What is it? – The UK’s largest light festival 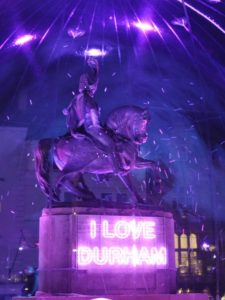 Where is it? – Various locations around Durham

The Lumiere festival only descends on Durham every two years. Lucky for me, I got to experience Lumiere as a fresher, and this year I get to do it all over again. The festival is a real spectacle, and you’ll truly get to see Durham in a new light, like you’ve never seen it. So here’s what to expect from the festival.

Firstly, it’s free, and you’re smack bang in the middle of it. Unlike the hundreds and thousands of people who travel from miles away to come and see the Lumiere Festival, you’re lucky enough to have it right on your doorstep. So embrace it! 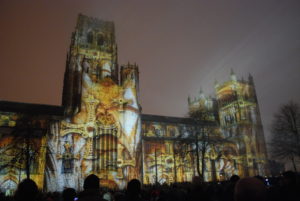 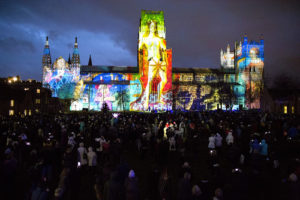 Coming from the north-west of England, the most spectacular light show I had seen before Lumiere was Blackpool Illuminations from the back seat of my dad’s car. Lumiere trumps that in every way possible. The installations are scattered across Durham, all the way from the Botanic Gardens, down to the remarkable centrepiece at Durham Cathedral, each installation is completely different and unbelievably magical.

A Whale in the Wear?!

At the last Lumiere in 2015, the projection of a moving whale splashing its tail cast onto the river had me glued to Elvet Bridge for repeat after repeat of the projection. Of course, if you’ve seen any pictures from the Lumiere, you’re likely to have seen the unbelievable projection onto Durham Cathedral that covers every inch of the building, projecting into every crack, every ledge, every window, continuously moving and changing to music played to us all stood in awe on Palace Green (in the rain, of course!). 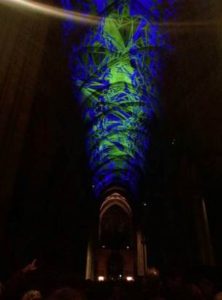 Inside the cathedral itself the show didn’t end. Projections on the ceiling that only changed when people below were moving, had us all craning out necks upward, trying to figure out which part of the display was being moved by little old you, rather than the hundreds of people moving around you. Even your usually average stroll along the river is transported into an enchanting pathway with fairy lights hung all along the embankment. Durham is well known for its beauty, but the festival really does showcase it in a way you could never imagine. 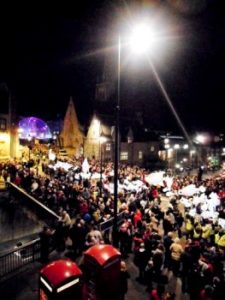 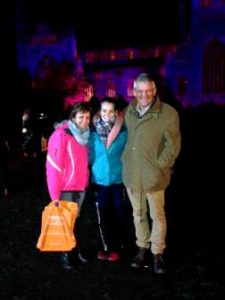 But there are a couple of things you should be prepared for. The weather (as always) could be dreadful. Don’t let it stop you from exploring. We stood in masses watching the cathedral projection whilst rain and wind battered us the bits, and we still managed to love it! Another thing to be prepared for is the sheer number of people that are going to be in Durham. You might think its ‘busy’ on a Saturday afternoon when the markets on, but just you wait. Durham is only little, but the festival packs the city out to its fullest capacity.  Because of this, and because Durham want to keep you as safe as possible, security checks at entrance points along the peninsula will mean your bag getting search and will cause queues. So just account for added delays to any trips that you make across town whilst the festival is on.

All in all, just enjoy the fact that you’ve picked a university where once every two years you get to share your new home with the UK’s largest light festival!

Durham University is a major Partner in Lumiere 2017.

Researchers from the Institute for Computational Cosmology have been working with artists to create the Cosmoscope installation which will be projected onto the The Ogden Centre for Fundamental Physics. This project has also involved outreach work with 14 local Primary Schools. The University will be hosting installations across the city, including the Botanic Garden   and the Lower Mountjoy Science Site.

Visit the University Lumiere webpages to find out more!