3 minutes of wonder at the Royal Institution

I am a postgraduate in physics and I study superconductors, mainly their capacity to carry large currents. My research is quite technical and I am trying to better understand uncertainties in a measurement technique.  I look at errors which have been considered to be small, but systematic, and try to see if we can account for them fully.  The title, ‘measuring engineering properties of superconductors’ is not the most enthralling or possibly accessible, but with applications to engineering there is some real interest in this work.

In March I won the North East regional final of the Institute of Physics 3 minute wonder competition. I competed at The Lit and Phil  society in Newcastle, presenting my research to a non-specialist audience within the time constraint and making it interesting and accessible. It is well worth visiting the library at the Lit and Phil if you like historic buildings and books. 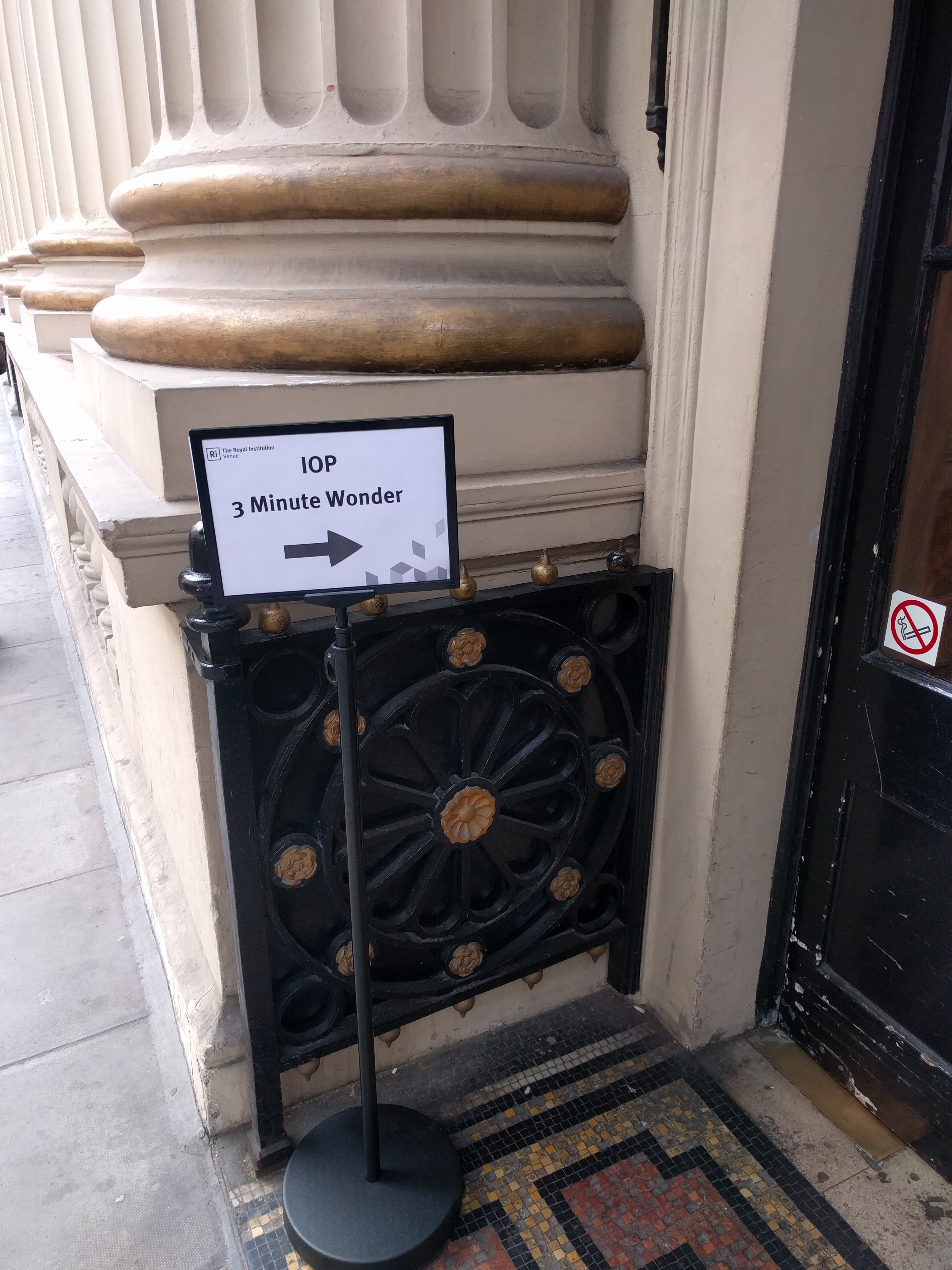 On Thursday the 5th of May I presented at the three minute wonder final at the world famous Royal Institution. There have been 14 Nobel Prize winners who have worked at the Royal Institution, a very special place for scientific discoveries. You may recognise the lecture theatre from the annual Christmas lectures. The Faraday lecture theatre is arguably the most daunting place to give a talk as a scientist, junior or otherwise.

The competition was judged by Maggie Philbin, who is an executive producer on ‘Bang Goes The Theory’, Fran Scott, Science Presenter on CBBC, Helen Thomas, a BBC science producer and Marek Kukula, Public Astronomer at Royal Observatory, Greenwich.

The offer of free wine and nibbles did little to settle my nerves. An audience of about 360 people and bright hot stage lighting did not help either. The order was drawn out of the hat, and I was to speak first. I went up on and stood behind Faraday’s famous desk.

After the very important three minutes I was asked questions from the audience. Inquiries about the technical aspects and the impact of my research. I think I managed to answer convincingly. The judges scores followed, which were done in the style of ‘Strictly Come Dancing’. I was awarded sixes and a five, so a score of 23 out of 40 was probably not going to get me far in the final.

I received some positive feedback from the judges about my story and my slide, but it was made clear that I needed to explain to my audience why I was doing my research, and instil wonder. “What does it all mean?!” This I thought was always going to be a problem, how do you make a 2% error in an engineering parameter (which is unlikely you will have any previous experience of) interesting to an audience? Answers on postcards please.

The other speakers, junior scientists from around the country, spoke on a variety of topics, from DNA origami, solar power, brazing of metals, and astrophysics. The winner presented his research in nanowire ending with the often repeated joke, “nanotechnology, it could be the next big thing”. His stage presence and confidence were admirable qualities.

I think that if I was going to offer any advice for future speakers it would be to get some props or anything that moves and makes noises, and try to really just focus on the speculative aspect of the research.